Mavado to sue politician over house 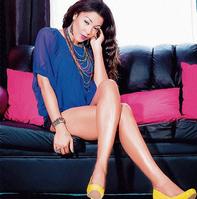 Diamond Music Empire recording artiste D’Angel returned to Jamaica after a successful tour of several states in the United States in August.

The Hot Gal March Out singer closed off her first US tour with an emphatic performance in Bronx, New York, at the Garage nightclub with headliners Konshens and Assassin.

“At the Garage nightclub, mi surprise everybody. Mi get four corner forward fi Stronger and Downtown Girl. That was my best show, and I did several songs, and the response was amazing. When it was done, Assassin came over and hugged me, and that was great because that recognition was coming from my peers, who I respect so much,” she said.

Before that, D’Angel did several shows alongside Singa J, G Warren, Future Fambo, Lisa Hyper, and Cobra in states such as North Carolina, Virginia, Connecticut, and Maryland.

“Not all the club shows were sold out, but we were professional in that at every venue, we gave complete performances. Mi surprise nuff people. when I am onstage, I am no longer the demure D’Angel. I transform into somebody else, and the people dem love me. the ting loud, yard, and abroad,” she said.

She now understands the rigours and demands of a club tour.

“I got minimal sleep on tours, but I was willing to sacrifice to set the platform for bigger arenas in the future. I am now mentally receptive to tours and what it is all about – the rigours and challenges.

“It was fun and amazing. I saw Lisa Hyper at one event, Singa J, G Warren, Future Fambo, and Cobra. everybody dominated in their own way. We had a great time. Fifty-two states love me and mi go 10 already. I am ready to spread my wings and fly,” she said.

Now that she has returned to Jamaica, the hardest-working woman in showbiz is not taking a sabbatical, she is already on the go.

“I have already hit the hill to do my exercises, and I am doing rehearsals for the dancing routines for Hot Gal March Out. This week, I will take a spa day, and then mi ready fi tek dem on the road again,” D’Angel said.

She is managed by Robert Diamond, the CEO of the US-based independent label Diamond Music Empire.

“Mi nah stop say Diamond Music Empire. my career is now on a different level. The next single, Gimme De Money,will be shot in New York with hot cars like a Rolls Royce. The video haffi look rich, and worse, a foreign it a shoot. ting overload and look good,” she said, laughing.

For the original report go to http://jamaica-star.com/thestar/20130909/ent/ent2.html