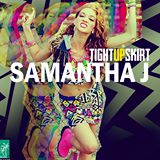 Samantha J, a 16-year-old from Ocho Rios, St Ann, is the latest Jamaican artiste poised to crossoverinternational music markets with her debut single Tight Up Skirt.

Tight Up Skirt is an uptempo dancehall-pop hybrid song, produced by local musical powerhouse Washroom Entertainment. The song’s title is a namesake of the 1990s dancehall classic by Red Rat.

American music executive, Gary Bernstein of Oceanic Tradewinds Music, described Samantha J’s artistry as: “A young artiste with many great songs, many of which she’s co-written. She’s hip, innovative, with a different yet appealing look. I think that she has all the necessary assets to be an international star. Including Tight Up Skirt, Samantha J has several other breakout potential songs as well, a major asset that 98 per cent of the best artistes out there simply don’t have! Watch out for this soon-to-be star!”

Tight Up Skirt is currently experiencing a soft launch, which includes the addition of the track to several key radio outlets locally, and the internet streaming of the track on the global music community Soundcloud. The Soundcloud link for the song is https://soundcloud.com/washrooment/tight-up-skirt-by-samantha-j.

Appreciative of her growing fan base, Samantha J notes: “When people listen to my music, I want them to feel a connection, and be uplifted by my art.”

To capitalise on the song’s fast rise and palatable sound for markets worldwide, a music video has been directed by Scorpio 21. The clip will debut in the coming weeks, and will feature fast-pace choreography with various backdrops throughout Kingston.

In addition to a televised feature on the highly teen sensation rated Entertainment Report on TVJ, Samantha J performed Tight Up Skirt for the thousands of patrons who attended the recent two-day Lime Skool Aid edutainment fair. The young audience was so receptive of her performance that Samantha J had to stay back for a couple of hours after the show, to sign autographs and speak to her new fans.

For the original report go to http://jamaica-star.com/thestar/20130909/ent/ent9.html