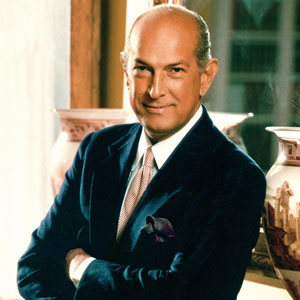 By Shelley Acoca And Jocelyn Noveck

NEW YORK _ At his Fashion Week runway show in September, Oscar de la Renta sat in his usual spot: in a chair right inside the wings, where he could carefully inspect each model just as she was about to emerge in one of his sumptuous, impeccably constructed designs.

At the end of the show, the legendary designer himself emerged, supported by two of his models. He didn’t walk on his own, and didn’t go far, but he was beaming from ear to ear. He gave each model a peck on the cheek, and then returned to the wings, where models and staff could be heard cheering him enthusiastically.

De la Renta, who dressed first ladies, socialites and Hollywood stars for more than four decades, died Monday evening at his Connecticut home at age 82, only six weeks after that runway show. But not before another high-profile honour was bestowed on him: The most famous bride in the world, Amal Alamuddin, wore a custom, off-the-shoulder de la Renta gown to wed George Clooney in Venice. Photos of the smiling designer perched on a table at the dress fitting appeared in Vogue.

De la Renta died surrounded by family, friends and “more than a few dogs,” according to a handwritten statement signed by his stepdaughter Eliza Reed Bolen and her husband, Alex Bolen. The statement did not specify a cause of death, but de la Renta had spoken in the past of having cancer.

“He died exactly as he lived: with tremendous grace, great dignity and very much on his own terms,” the statement said. “While our hearts are broken by the idea of life without Oscar, he is still very much with us. … All that we have done, and all that we will do, is informed by his values and his spirit.”

The late ’60s and early ’70s were a defining moment in U.S. fashion as New York-based designers carved out a look of their own that was finally taken seriously by Europeans. De la Renta and his peers, including the late Bill Blass, Halston and Geoffrey Beene, defined American style then and now.

De la Renta’s specialty was eveningwear, though he also was known for chic daytime suits favoured by the women who would gather at the Four Seasons or Le Cirque at lunchtime. His signature looks were voluminous skirts, exquisite embroideries and rich colours.

Earlier this month, first lady Michelle Obama notably wore a de la Renta dress for the first time. De la Renta had criticized her several years earlier for not wearing an American label to a state dinner in 2011.

Among Obama’s predecessors favouring de la Renta were Laura Bush, who wore an icy blue gown by de la Renta to the 2005 inaugural ball, and Hillary Rodham Clinton, who wore a gold de la Renta in 1997.

“We will miss Oscar’s generous and warm personality, his charm, and his wonderful talents.” Bush said in a statement. “ We will always remember him as the man who made women look and feel beautiful.”

A statement from former President Bill Clinton, Hillary Clinton, and Chelsea Clinton and Marc Mezvinsky, said: “Oscar’s remarkable eye was matched only by his generous heart. His legacy of philanthropy extended from children in his home country who now have access to education and health care, to some of New York’s finest artists whose creativity has been sustained through his support.”

De la Renta made just as big a name for himself on the Hollywood red carpet _ with actresses of all ages. Penelope Cruz and Sandra Bullock were among the celebrities to don his feminine and opulent gowns. His clothes even were woven into episodes of “Sex and the City,” with its style icon, Carrie Bradshaw, comparing his designs to poetry.

One actress who wore a de la Renta gown to this year’s Oscars was Jennifer Garner.

“Mr. de la Renta loved women,” she said on Monday evening, wiping away tears. “And you saw it in every design that he did. He honoured women’s features, he honoured our bodies. He wasn’t afraid to pull back and let the woman be the star of the look.”

De la Renta was also deeply admired by his fellow designers. “He set the bar,” designer Dennis Basso said on Instagram Monday night. “But most of all he was a refined elegant gentleman.”

The designer’s path to New York’s Seventh Avenue took an unlikely route: He left his native Dominican Republic at 18 to study painting in Spain, but soon became sidetracked by fashion. The wife of the U.S. ambassador saw some of his sketches and asked him to make a dress for her daughter _ a dress that landed on the cover of Life magazine.

That led to an apprenticeship with Cristobal Balenciaga, and then de la Renta moved to France to work for Lanvin. By 1963, he was working for Elizabeth Arden couture in New York, and in 1965 he launched his own label.

He told The Associated Press in 2004 that his Hispanic roots had worked their way into his designs.

While de la Renta made Manhattan his primary home, he often visited the Dominican Republic and kept a home there. Vogue Editor-in-Chief Anna Wintour was a frequent visitor.

“His designs reflected his extraordinary personality: optimistic, fun, sunny, romantic,” Wintour wrote in a remembrance on Tuesday. “He always said accept your friends for who they are, not for who you want them to be. Oscar was everything you could want a friend to be. ”

He also had a country home in Kent, Connecticut, where he died Monday. Gardening and dancing were among his favourite diversions from work. “I’m a very restless person. I’m always doing something. The creative process never stops,” he said.

As a designer, de la Renta catered to his socialite friends and neighbours _ he and his wife, Annette, were fixtures on the black-tie charity circuit _ but he did make occasional efforts to reach the masses, including launching a mid-priced line in 2004 and developing a dozen or so perfumes.

He was an avid patron of the arts, serving as a board member of The Metropolitan Opera and Carnegie Hall, among others, and he devoted considerable time to children’s charities, including New Yorkers for Children. He also helped fund schools and day-care centres in La Romana and Punta Cana in his native country.

The Dominican Republic honoured de la Renta with the Order of Merit of Juan Pablo Duarte and the order of Cristobol Colon. In the United States, he received the Coty American Fashion Critics Award twice, was named womenswear designer of the year by the Council of Fashion Designers of America in 2000 and also received a lifetime achievement award from the CFDA _ an organization for which he served as president in the 1980s.

Besides his own label, de la Renta spearheaded the Pierre Balmain collection from 1993-2002, marking the first time an American designed for a French couture house, and he was awarded the French Legion of Honor with the rank of commander. He also received the Gold Medal Award from the king and queen of Spain.

De la Renta gave up the title of chief executive of his company in 2004, handing over business duties to the Bolens, but he remained active and continued to show his collections during New York Fashion Week.

De la Renta also is survived by his son, Moises, a designer at the company.