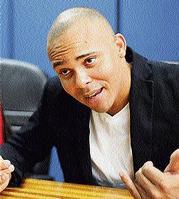 The song was recently recorded at Big Yard recording studio and, according to Elephant Man, the collaboration was inevitable because he and Major Lazer make similar music.

“Major Lazer call me and sey dem wah do a project wid me. They said they have a rhythm with an Elephant Man type of vibes and they want to keep dancehall happy and nice. Everybody knows that is what Elephant Man is about so they flew to Jamaica and we booked the studio time and deal wid it,” Elephant Man said.

Pon Di Something will be released this weekend. However, the Pon Di Riva deejay revealed that persons who have heard the song were pleased with the product. Elephant Man also believes the song will be just as successful as Major Lazer’s previous effort, Watch Out Fi Dis(Bumaye) featuring his Alliance affiliate Busy Signal.

“I just finished filming the video for Twerk and Major Lazer dem done have some plans for this music video, so Pon Di Something is next. I think this song will blow up in Europe as well, because Elephant Man has a huge fan base in Europe. I run that side of the world when it comes to doing happy music,” the deejay said.

In recent times, Major Lazer also collaborated with popular dancer, Mystic, for a single called Bubble Butt. So far,that effort has received over 17 million views on YouTube.com, while Watch Out Fi Dis(Bumaye) has over 39 million views on the same site.

Elephant Man will be one of the featured acts at The STAR‘s Magnum ALL STAR Million Dollar Face-Off, set for Thursday, November 14 at the Famous Nightclub in Portmore. Elephant Man will square off against KipRich in a celebrity selectors’ clash.

For the original report go to http://jamaica-star.com/thestar/20131030/ent/ent1.html