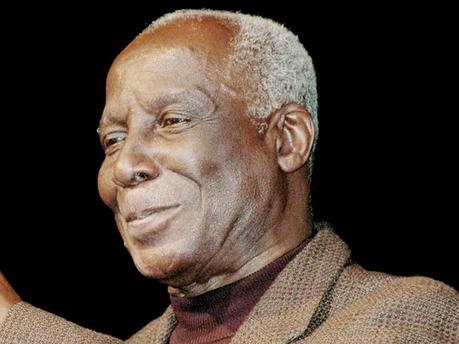 He was a dancer and choreographer par excellence. He was an outstanding academic who taught his students well. His original thoughts and poetic articulation made him the Caribbean’s favourite intellectual. These are the attributes that made Professor Rex Nettleford unique and special, but there was another side to the man that few ever saw.

This Sunday at the Carib cinema, a very select group of invitees, headed by His Excellency, Governor General Sir Patrick Allen and Her Excellency Lady Allen will see the premiere of a new film which goes behind the mask to reveal another side of this giant of a man.

This is the story of a man who has left an indelible imprint across the Caribbean in the arts, academia and the social fabric of a diverse society.

Helmed by a filmmaker who knew him well, Lennie Little-White has cracked the shell of the coconut to get to the meat of the matter with an incisive look at the métier of a man admired by many but understood by few.

With the help of his long-time executive assistant, Eula Morgan, and childhood friend, Dr Lester Woolery, the film opens another chapter of Nettleford’s life.

Less than three months ago, Little-White completed Renaissance Man – a commission from the Rex Nettleford Foundation.

This journey culminated with his crowning as the first UWI graduate to become the vice-chancellor of the University of the West Indies. This begs the question – why do another film about the professor?

Little-White was quick to point out that the previous film was only 45 minutes long and could not tell the whole story of a man that was not only his personal friend, but his mentor in many ways.

“I wanted to expose the totality of the man I know – his humble beginnings, his humility, his large collection of art, his love of all strands of music, his epicurean passion for ‘yard’ food and his tremendous philanthropy to many ordinary Jamaicans – on and off campus,” said Little-White.

Without any financial support, except from his own pocket, Little-White has just completed the film which boasts the dulcet tones of Adrian Atkinson and Professor Edward Baugh, who voiced the narration against the musical composition of Jon Williams. This is balanced by comments from former prime ministers and long-time academic associate Dr Veronica Salter.

“In this film, I did everything to stay away from the UWI campus and present as many fresh perspectives from those whose visions were not coloured by the politics of the university’s academic courtyard,” said Little-White.

These original and varied opinions are married to a cross-section of Nettleford’s colourful choreographic canvas for the NDTC.

Long Live the King is the final leg of a trilogy of films that Little-White has done on Professor Nettleford.

Immediately after his transition, he produced an 18-minute piece which he considers a requiem.

Renaissance Man was a celebration of Nettleford’s achievements as a scholar, an intellectual and a man of the arts.

Long Live the King is the “groundation” or “earth runnings” that tells the story of the gentler, kinder side of Rex – the man.

For the original report go to http://jamaica-gleaner.com/gleaner/20131212/ent/ent2.html