TORONTO, Dec. 7, 2022 /CNW/ – The love of hockey, Canada’s national sport, unites Canadians from coast to coast to coast. But while our collective passion for the game brings us all together, the organization of the sport itself has not reflected the Canadian ideals of diversity, equality and multiculturalism. 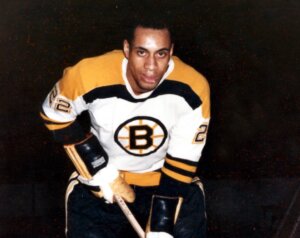 Today, on behalf of the Honourable Steven Guilbeault, Minister of Environment and Climate Change and Minister responsible for Parks Canada, Adam van Koeverden, Parliamentary Secretary to the Minister of Health and to the Minister of Sport and Member of Parliament for Milton, announced the designation of Breaking Racial Barriers in the National Hockey League (NHL) as an event of national historic significance under Parks Canada’s National Program of Historical Commemoration. The designation was commemorated at a special ceremony held at the Hockey Hall of Fame in Toronto, Ontario.

While Canadians of all backgrounds played and enjoyed hockey, racial discrimination and prejudice existed in player development programs across Canada. Depending on where they were in Canada, some Indigenous, Chinese Canadian, Black and other racialized players instead played in separate leagues, on segregated teams like the Colored Hockey League of the Maritimes (CHL), founded in Halifax in 1895. Many Indigenous players learned the sport while forced to attend residential schools.

When the NHL was formed in 1917, these separate and segregated programs did not feed into the NHL’s development system, limiting opportunities for players from racialized and Indigenous communities to play at the sport’s highest level and perpetuating the status quo. Jacobs, Maracle, Kwong, Sasakamoose, and O’Ree were five players who each broke through racial barriers in their career, ultimately reaching hockey’s premier league during the NHL’s early decades and beyond. Their stories expose the fight against racism and prejudice in hockey and in Canada. During and after their careers, these players inspired generations of players who followed in their steps.

The Government of Canada, through the Historic Sites and Monuments Board of Canada, recognizes significant persons, places, and events that have shaped our country as one way of helping Canadians connect with their past. By sharing these stories with Canadians, we hope to foster understanding and reflection on the diverse histories, cultures, legacies, and realities of Canada’s past and present.

The designation process under Parks Canada’s National Program of Historical Commemoration is driven by public nominations. To date, more than 2,200 designations have been made nationwide. To nominate a person, place or historic event in your community, please visit the Parks Canada website for more information: https://www.pc.gc.ca/en/culture/clmhc-hsmbc/ncp-pcn/application.

“Hockey is Canada – and the struggles players faced in the sport reflect the struggles of racialized and Indigenous communities in Canadian society at the time and which too often continue today. During and after their careers, Paul Jacobs, Henry “Elmer” Maracle, Larry Kwong, Fred Sasakamoose, and Willie O’Ree have exemplified leadership for their respective communities. They serve as examples for greater inclusion in the sport, and by recognizing the national historic significance of their achievement, we honour their  skill, perseverance and power to inspire greater inclusivity in every corner of our diverse country.”

“We acknowledge the tremendous contributions of Paul Jacobs, Henry “Elmer” Maracle, Larry Kwong, Fred Sasakamoose, and Willie O’Ree – five players who paved the way as examples for their communities and all Canadians by reaching hockey’s highest level. Their struggles and legacies inspired the generations of players who followed and are still felt today.”

“As we commemorate breaking down racial barriers in the National Hockey League, I want to recognize the work the NHL continues to do through programs like Hockey is for Everyone. This work is more important than ever, and continued support is necessary and appreciated.”