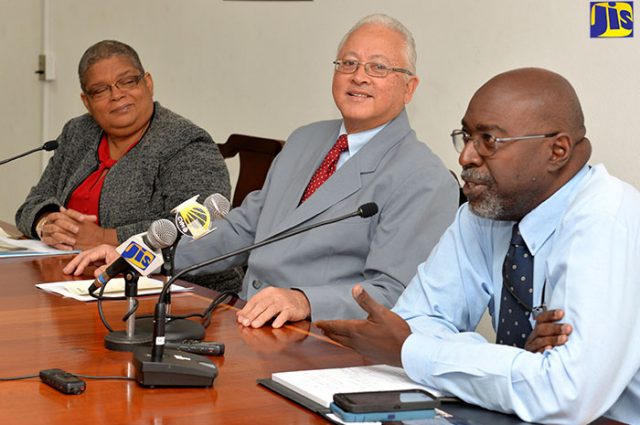 Photo: Minister of Justice, Hon. Delroy Chuck, listens to remarks from Director of the Legal Reform Department in the Ministry, Maurice Bailey (right), at a post-Sectoral Debate Press Briefing held on May 3, at the Ministry’s Constant Spring Road offices, St. Andrew. At left is Permanent Secretary in the Ministry, Carol Palmer.

The Justice Ministry has embarked on a review of all Acts and Regulations to ensure that penalties for breaches are in line with current realities.

Director of the Legal Reform Department, Maurice Bailey, said pieces of legislation that are obsolete and archaic will be brought up to date.

He informed that three officers have been assigned to undertake the review.

“One of the things we will be doing is writing to all the ministries, to get their assistance in providing all Orders, Regulations and all laws under their portfolio, so we can be sure that when we do present to the (Justice) Minister and to Cabinet we have an accurate and complete inventory of all of the laws and the monetary penalties that are there,” Mr. Bailey said.

He noted that legislation flagged for reform will also be addressed.

He was speaking at a post-Sectoral Debate press briefing held at the Ministry’s offices on Constant Spring Road on Wednesday (May 3).

The matter of penalties had come up for public discussion recently, following two cases in which persons convicted of breaches had paid insignificant fines.

“The idea, also, going forward, is that there will be an omnibus mechanism that can be used to categorise, classify these fines and to ensure that they can be kept up to date going forward,” Mr. Bailey explained.

He noted that the Legal Reform Department updates laws that have been brought to its attention by ministries and departments.

“One of the things that we will routinely do is, if the ministry itself that is proposing the legislation has not done so, we will ensure that the fines are updated. So, it is not that everything has been left languishing, but we do need this comprehensive kind of review of the inventory,” he pointed out.