Kamina Johnson-Smith Nominated For Secretary General Of The Commonwealth

“Baroness Scotland would not get the support of UK, Canada, and Kenya to name a few.  So we took a sovereign decision … we are aware that Johnson-Smith is committed to the commonwealth”

So stated the PM on Tuesday the 12th April 2022 as he addressed Parliament.

Kenya’s Zuma, their mining minister, the candidate from Kenya has withdrawn from the race. Jamaica has since put up a candidate in Kamina Johnson-Smith in Jamaica’s Foreign Trade Minister. She happens to be an attorney-at- law.  The incumbent Scotland, is a former attorney general. 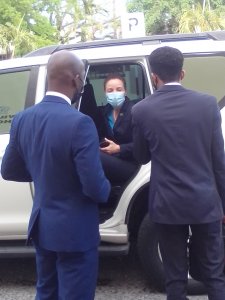 Photo Caption:. The candidate for Secretary General Senator Kamina Johnson-Smith is flanked by security and an unknown person as she left the Joint Sitting of Parliament to honour the State Visit of the Rowandan President His Excellency Paul Kagame of the Republic of Rwanda. April 14, 2022.

“She is qualified for the job of Secretary General. Jamaica has strayed from this course, on for example, with the Venezuela issue.  The way we handled certain regional issues have damaged unity and is messy.”

“Jamaica supported that decision overwhelmingly. This decision was recorded in the communique of the recently held Belize meeting of regional leaders that Jamaica attended.”

The Caribbean has 15 votes. What about T&T,  India, Gaston Brown, Gonzalez,  Grenada, Belize is chair of Caricom. The media is being reminded that it fuelled the Rwandan conflict.

The grouping of countries calling itself the Commonwealth. The grouping consist of 2.3 billion people and 54 nations mainly former British colonies.  The membership is open to non Commonwealth countries.  In fact some have joined the grouping who were not former commonwealth entities.

There are 34 small states which are a part of the Commonwealth grouping.

It is a relic and we are moving away.  Benefits consist of a flow of resources from the developed to the developing states. The Queen heads the Commonwealth. Seron Sand was Antiguan candidate who no longer is the race.

Baroness Scotland is Dominican who is  of British lineage  The criticism comes from the British.  She is a Liberal Peer.  She was not fully supported from day one. In Parliament PM Holness has formally stated that Jamaica will put up Senator Kamina Johnson-Smith as a candidate to the position of Secretary General of the Commonwealth. The P.M. told Jamaica’s Parliament to much fanfare and bench stamping.

Kamina Johnson-Smith, the Candidate was specially invited and was present in parliament to hear the debates.

Hopeton O’Connor-Dennie was in court and filed this report. He is a poet, elegist, author and senior international journalist who writes for Vision newspaper.