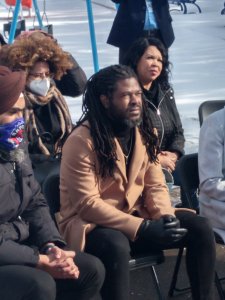 Kirk Diamond During his park unveiling in Brampton Ontario on February 28, 2022

Kirk Douglas popularly known by his stage name Kirk Diamond made history when he was honored in a park in his name. The park in Brampton formerly known as Shields Park is now Kirk Diamond Park. This makes Kirk Diamond the first Reggae Artiste to receive a park in Canada.

Kirk Diamond is a Juno award winner, singer, songwriter, producer and social activist. Kirk spreads messages of unity, inclusion and love through his music, joined by The Movement of Ahryel. Since its formation, the band has opened for international reggae powerhouses and performed on global stages. In 2020, Kirk was the recipient of the Vigor Award in the Achievement category and a Recognition Certificate from the City of Brampton for being the first Reggae Artist to Co-Host Etalk Canada, paving the way for more representation and display of culture. Kirk continues to push the influence of reggae music internationally, while bringing about social change through his music.

On February 28th a ceremony was held to commemorate the unveiling of the park.  The audience was filled with elected officials, family, friends and well-wishers. 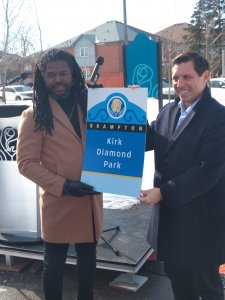 Remarks were given by Brampton’s Mayor Patrick Brown, who later presented Diamond with a mock-up of the park sign. As well as  City Councillors Rowena Santos, Harkirat Singh, Gurpreet Dhillon,  community activist and organizer for the ceremony Kimberlee Shelley, Kirk’s high school Principal Joe Geiser who surprised Kirk in his attending and a performance from members of his band – The Movement of Ahryel.

Diamond received  this honor in the city of Brampton recognizing his accomplishments, activism and strides in the reggae arena in Canada and beyond.

“It’s the ultimate honor and it’s not just for me but my family, community and the culture.”

Diamond who won a Juno Award in 2018  for his EP Greater was nominated for the third time this year for His song Too Ruff and just release the first single “Ruler” from his debut album Poetic Revolution.