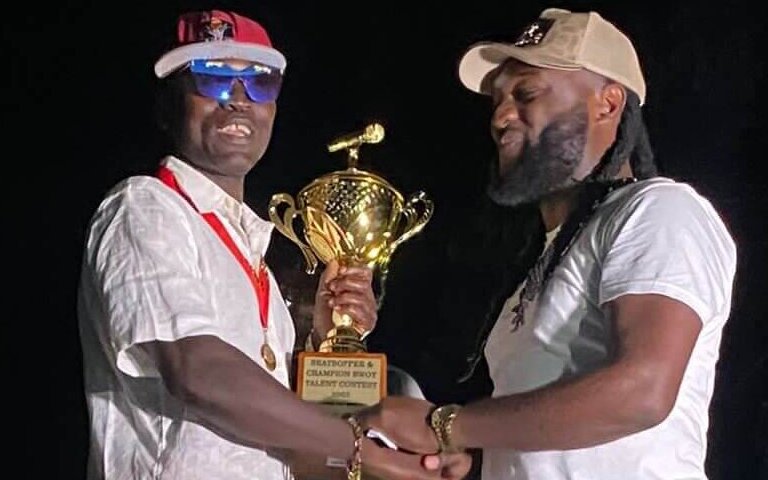 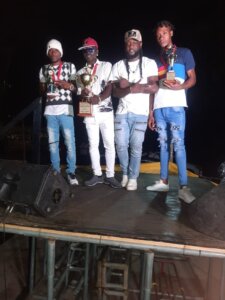 The crowd loved him and cheered non-stop as he collected the “Beatbopper” Trophy, recording contract worth some $600,000 and a gift basket.

Other sponsors were Rain Drops Entertainment and  OP Enterprises.

The night’s event began with the  National anthem of Jamaica, before the finalists rendered their favourite cover version.

Kryme Rate wisely picked “Picture Fi Frame”-  made popular in the late 90’s by deejay Zebra. His well choreographed set and sharp lyrical tongue had the judges uneasy in their seats.

The  original segment was far more competitive as finalists  put out their best to gain the top positions. Ras Nucah had the females singing along with “Hold On Pon You Lover,” X- xavi pulled out “Vanity Girl,” while Kryme Rate took “Money Machine” to the crowd who had declared him winner long before the result were known.

Other finalists were Pop Skull, Ras Nucah and Raymond Blinger.

Promoter Owayne “Champion Bwoy” Thompson, obviously pleased with the production, says “It was a great show. The production team gave their best and fans have been congratulating me for the show’s quality.”

Champion Bwoy made special mentions to all sponsors throughout the programme. He is considering making the event an annual affair.