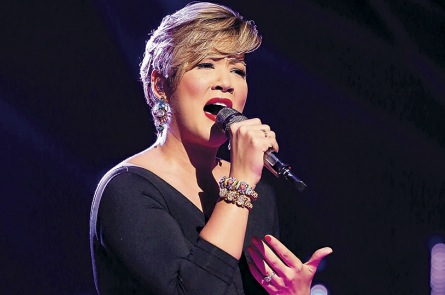 DANCEHALL artiste Lady Saw has given singer Tessanne Chin the ‘thumbs up’ for her performance of the No Doubt’s Underneath It All, on Monday’s performance show of The Voice.

The track, which was recorded in Port Antonio and was one of the hit singles from No Doubt’s reggae-inspired, Grammywinning album Rocksteady (2001), features the indomitable deejaying style of Lady Saw.

It was Chin who first took to social media following her performance and tweeted to Lady Saw: “I know my DJ wasn’t as flawless as yours but I hope I made you proud anyways 🙂 nuff love and respect!” After Retweeting Chin, Lady Saw responded: “u did me proud girl and our country.

I’m so happy for u hun .. u gonna WIN this!!!!!! Get the VOTES going peeps!!!” Chin’s sister Tami, in a Tweet to Lady Saw stated: “mi hope u know how excited Tess was to do this song!!!!” To which the Queen of the Dancehall tweeted: “I’m proud of Tesse and she was so damn Goood! Luvvd it!”.

Lady Saw would further encourage fans to vote for Chin noting, “She is The Voice.” — Richard Johnson

For the original report go to http://www.jamaicaobserver.com/entertainment/Lady-Saw-gives-Chin-thumbs-up