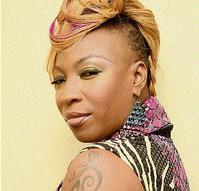 “The single will be officially premiered on Friday (today) by a number of disc jockeys on IRIE, and HITZ. The song is not referring to anyone in particular, but is just a reminder of the daily struggles we all face in life, and how we have to overcome, tap into the Marcus Garvey spirit, the warrior light inside, to push through,” Macka diamond said.

Macka had a successful 2013 during which she completed her first European tour in November, and shows in the French Caribbean islands of Martinique, Guadeloupe and French Guiana.

She also did shows in Caribbean countries including Trinidad and the Bahamas. Macka also performed at sold-out venues in the United States.

Her breakout single, Dye Dye, went number one on local and international charts and continues to get excellent rotation.

The Spanish version to the song is selling well on iTunes in Latin America.Her follow-up singles, Twist Me and Mr Touchy Touchy are also staples in local street dances all over the island.

“Right now, is just more hits pon toppa hits. I will be working hard to make my fans happy,” she said.

“Everybody ah tease me say me ah the real Money Goddess. mi have three parties fi mi birthday, but the Dye Dye Invasion is huge. Dye Dye was one of the biggest songs in Jamaica last year, so I am just thanking my business partners for making this a reality for my fans in the different parishes of the island,” she said.

Macka Diamond will be at the YVA awards launch today. She is nominated for Female Deejay of the Year.

For the original report go to http://jamaica-star.com/thestar/20140103/ent/ent2.html