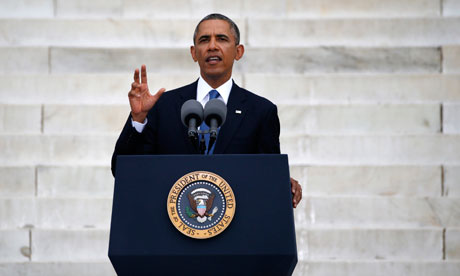 Barack Obama spoke on the steps of the Lincoln Memorial in Washington, where Martin Luther King delivered his speech.

Barack Obama, the first black president of the United States, marked the 50th anniversary of Martin Luther King‘s “I have a dream” speech on Wednesday with a powerful declaration that economic inequality has left the dream unfulfilled for many Americans.

On the steps of the Lincoln Memorial in Washington, where King delivered his resounding address in 1963 at a pivotal time in the battle for racial equality in the US, the president said the civil rights leader’s words “belong to the ages, possessing a power and prophecy unmatched in our time”.

Obama did not dwell overly long on King, choosing also to pay tribute to the thousands of demonstrated in the March on Washington five decades ago. Their achievements had benefited not just African Americans, but all minorities, he said.

The president’s speech ranged across gay equality, women’s rights and immigration reform, but focused on what he called the continuing “shadow of poverty” – the aspect of King’s dream that was furthest from being realised. “For the men and women who gathered 50 years ago were not there in search of some abstract ideal,” he said. “They were there seeking jobs as well as justice. Not just the absence of oppression but the presence of economic opportunity.”

In the last half-century, black black unemployment has remained almost twice as high as white employment with “Latino unemployment close behind”, Obama told the crowd. “The gap in wealth between races has not lessened, it’s grown.”

Obama talked of giving “a fair shot” to black janitors, white steelworkers, immigrant dishwashers and Native American veterans. “To win that battle, to answer that call – this remains our great unfinished business,” he said.

The president opened by describing the ordinary people who participated in the civil rights movement that helped redefine the country. “Men and women, young and old, blacks who longed for freedom, and whites who could not longer accept freedom for themselves while witnessing the subjugation of others.

“There were couples in love who couldn’t marry. Soldiers who fought for freedom abroad that they found denied to them at home. They’d seen loved ones beaten, and children fire-hosed.”

But Obama said that the profound achievements of the civil rights era “obscured a second goal” of the 1963 march – economic opportunity – and it was on this front that America had “fallen most short”.

Lewis, a 23-year-old student leader in 1963, gave roaring tribute to King, declaring: “Change has come.” He urged the crowd to follow King’s inspiration to take action over minority rights, the treatment of immigrants, stop-and-frisk policies and mass incarceration. “He taught us to stand up, to speak up, to speak out,” said Lewis. “To find a way to get in the way.”

Clinton attacked the weakening by the US supreme court of the Voting Rights Act, passed in 1965: “A great democracy does not make it harder to vote than to buy an assault weapon,” he said.

King’s daughter said she was five months old and probably “crawling on the floor” when her father gave his speech. “We must keep the sound and the message of freedom and justice going,” Farris said, adding that black people were still “crippled by practices and policies” steeped in racial discrimination. “Our challenge then as followers of Martin Luther King Jr is to honour his life, leadership and legacy by living our lives in a way that carries forward his unfinished work,” she said.

The ceremony was steeped in historical symbolism. Obama, the first black US president, paid tribute to a civil rights leader who, half a century earlier, imagined a world in which people would “not be judged by the colour of their skin but the content of their character”.

King in 1963, and Obama on Wednesday, spoke in the shadow of a statue of Abraham Lincoln, who 150 years ago delivered the Emancipation Proclamation that gave freedom to slaves. King’s speech came at the end of the 1963 March on Washington, an enormous protest that was broadcast live on TV, taking the civil rights movement into the living room of millions of Americans and giving the campaign for equal rights an unstoppable momentum.

Within two years, Congress had passed the Civil Rights Act and the Voting Rights Act – two legislative pillars to emerge from the civil rights era. King, who received the Nobel peace prize, was assassinated in 1968.

The 1963 marchers came despite unfounded warnings there would be violence. The city was in a security lockdown as many thousands came on trains and buses from the harshly segregated deep south. More than 250,000 people arrived on a swelteringly hot day, with some climbing trees for a better view or standing in the reflective pool to cool down.

On Wednesday, the tens of thousands who came to hear Obama speak had only to contend only with intermittent rain.

Obama has often said King is one of his heroes, and he keeps a framed programme from the 1963 march in the Oval Office.

Before the speech, the the White House had tried to play down comparisons between Obama and King. On the eve of the address, Obama had remarked “it won’t be as good as the speech 50 years ago”. But when he came to deliver the much-anticipated address, Obama sought to capture the style as well as the spirit of King’s speech.

Much as King did half a century ago, Obama finished with a rousing crescendo, saying ordinary people trying to improve their lives were following the footsteps of civil rights activists and, he said repeatedly, “marching”.

“And that’s the lesson of our past,” he concluded. “That’s the promise of tomorrow.”

By: Paul Lewis – The Guardian

For the original report go to http://www.theguardian.com/world/2013/aug/28/obama-martin-luther-king-50th-anniversary-celebrations