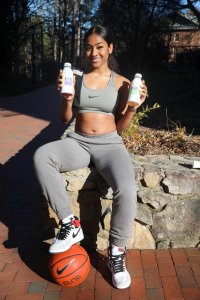 Originally hailing from San Antonio, Texas, and a graduate of Duncanville High School in Duncanville, Texas, Deja is leading the lady Tar Heels in scoring, and will be helping the team attempt to win its first ACC Championship since 2008. Deja is a natural fit for representing BARCODE as the Erewhon Market-backed company recently secured additional listings at Central Market across the state.

As part of the agreement, Deja will help elevate BARCODE‘s brand awareness and retail footprint across the Dallas-Fort Worth metroplex by showing up at local Central Market retail locations.

“Innovation and empowerment are core to who I am as a woman and an athlete,” says Deja. “It’s incredible to be an ambassador to a company that shares those values, and to own a piece of such a rapidly growing business.”

BARCODE will also become the official hydration partner of Deja Kelly’s Women’s Empowerment and Basketball Camps launching in San Antonio and Dallas in Summer 2022. The camps are designed for young women in Middle and High School to learn the fundamentals of basketball training, leadership, and essential life skills. BARCODE will be the official drink sponsor and provide its refreshing beverages boosted with multivitamins, ashwagandha, and magnesium. Bar will also be on hand to give motivational speeches about entrepreneurship.

“Our partnership with Deja Kelly is a no-brainer,” says Bar. “Her athletic excellence and unwavering commitment to healthy living align perfectly with our missions and value at BARCODE. We’re proud to have Deja join our team and help more consumers unlock their greatest potential through nutrition and lifestyle.”

Deja will be playing in the ACC Conference Tournament starting Friday, March 4th at 11am ET.