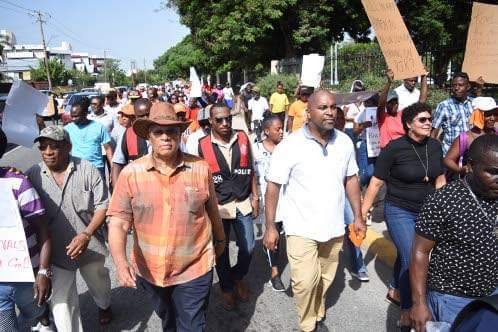 JLP’s Matthew Samuda say they are “Hypocrites” and have no moral authority to speak about corruption as they have been the most corrupt government in the history of politics in Jamaica.

Is this an attempt to overthrow the 3 year old JLP government?

Can your imagine a mongoose accusing a cat of stealing chickens?  The mongoose has no moral authority to be pointing a finger at master cat for stealing a chicken or two.  Brother mongoose has a well established reputation which is well documented for having a penchant  or addiction for the feathered spicie. They have a insatiable appetite for eating chickens.

Among the persons who have been fingered at the so called “vigil.” In half -way-tree.  Paulwell’s name has been linked to numerous scandals.  Netflix and other scandals are linked to Paulwell.  The PNP has had a multiplicity of scandals over a 18 year period. “It is blot on your copy book” according to Dennis Brooks speaking to Cliff Hughes on timeline,  a feature of Cliff Hughes online.  Brooks was commenting on how the PNP’S vigil would possibly be viewed by the public.

The 300 million dollar so called gift which the PNP got and which has been ruled to be illegal is yet to be resolved after years in the courts.  The top brass of the People’s National Party (PNP) including Portia Simpson Miller have been to court to avoid giving evidence in open court on the Trafigura scandal.

Former Education Minister Senator Ruel Reid resigned after there was leaked info that there was corruption and nepotism in his ministry.  The Caribbean Maritime University (CMU) has been embroiled in an alleged scheme to defraud the university by paying out secret payments to connected persons of the political arena.  Reid seems to be the central figure in it all. Nothing has been proven. Reid has not been  charged criminally. Reid has vowed that he is innocent of wrongdoing.

We agree with Senator Matthew Samuda that the PNP has no moral authority to scold on corruption.

Dr. Peter Phillips, Opposition Leader & Party President is being challenged for the leadership of the 81 year old PNP by Peter Bunting, MP for Central Manchester.  Bunting has his problems too as the Manchester Municipal Corporation is in court for an estimated 600 million fraud.  Top officials of the PNP controlled corporation have been charged. The PNP has a lot on which to think about.  From the top to the bottom of the party. Phillip’s is trailing PM Holness in the polls.  Jamaicans usually vote for a party leader whom they perceive as a better leader.

What is your perspective?  Do you trust the PNP?  Let us get your feedback.

Hopeton O’Connor-Dennie who is a veteran Journalist is SIC for Vision Newspaper Canada.