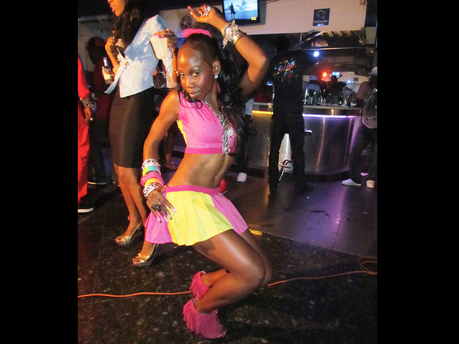 Popular contemporary dancer Queen Latesha is encouraging local dancers to be more creative as it relates to making themselves marketable to the world.

According to Latesha, some dancers think the only means to promote their work is via showboating at dancehall sessions. However, there are other avenues, she said.

The former Dancehall Queen recently returned from the United Kingdom where she performed at several venues alongside fellow dancers Ding Dong, Crazy Hype and Badda Bling. She was also featured on the cover of one of Japan’s most popular entertainment magazines.

“Sometimes I do stuff but I don’t really speak about it, so people don’t really know that I am still so involved. I was in Japan for a while, hosting, dancing and promoting,” she said.

According to Latesha, though it has been more than five years ago, winning the Dancehall Queen title still helps to propel her career.

“I was in Japan for three and half weeks … . Things have been happening internationally. The title Dancehall Queen still works for me. I utilise it and keep doing work, so there is a demand for me in the market. I set my thing different because I take it as a career, and I do dancing out of genuine love and not just for the money,” she said.

Latesha, who makes her own connections and handles her own bookings, says touring provides enough capital for her to maintain her livelihood.

However, being stationed in Jamaica would do little in the way of paying her bills or marketing the culture internationally.

Latesha is now planning her November European tour and has already secured bookings in Sweden, Paris, Finland and Rome. She will also make an appearance in Persia.

“Normally, when I’m doing a tour, I execute workshops where I teach Jamaican dance moves, I host events or I do music. Dancers need to get out of the box. They have talent but they just dress up and go on the street and dance, but it’s more than that. You can even make a portfolio and send it to corporate companies, just be creative,” she said.

Social networking is something else Latesha promotes and says dancers should work towards creating a good reputation for themselves so they can be globally marketable.

Queen Latesha is aiming at opening her own dance school and is promoting new female dance moves such as ‘The Bully’ and ‘The Power Up’.

The latter was featured in Macka Diamond’s song of the same title.

For the original report go to http://jamaica-gleaner.com/gleaner/20131030/ent/ent1.html