Honourable Dr. Ernest Hilaire was sworn into Saint Lucia’s Cabinet of Ministers on August 5, 2021, to the portfolio of Minister for Tourism, Investment, Creative Industries, Culture, and Information. As a former Saint Lucian Diplomat, he represents the Castries South constituency in the House of Assembly for the Saint Lucia Labour Party. 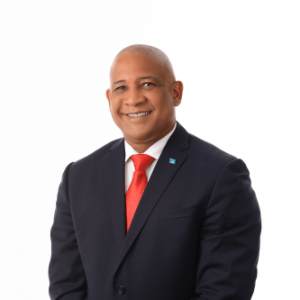 Since his appointment, Minister Hilaire has met with the Ministry of Tourism, Saint Lucia Tourism Authority, and private sector organizations to reaffirm the importance of tourism and gain visibility on the current plans. The strategy set forth to promote the destination will be a phased approach to full recovery of brand Saint Lucia under new leadership.

Holding a Bachelor of Science degree from the University of the West Indies in Political Science and Sociology, Hilaire also earned his Master of Philosophy degree with a distinction in International Relations, then pursued his Ph.D. from the London School of Economics. In addition, Dr. Ernest Hilaire holds an Executive Diploma in Negotiations and Conflict Resolution from Notre Dame University.

Dr. Hilaire served Saint Lucia as High Commissioner to the United Kingdom from 2012- 2016. Previous to that, he held the position of Chief Executive Officer for the West Indies Cricket Board.

Speaking on his appointment to the Cabinet of Ministers, Dr. Hilaire said, “Tourism is one of the main economic drivers of the Saint Lucian economy which strengthens our supply chain, promotes economic development, and creates significant employment. Therefore, given my experience, coupled with the amalgamation of my portfolios which function interconnectedly with our tourism product, I look forward to serving wholeheartedly, with focus on further bolstering the tourism sector and placing people at the center of the sector.”