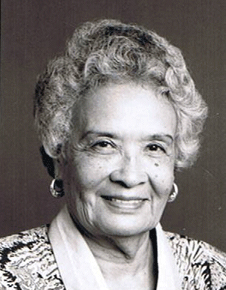 Lady Ivy Cooke widow of the late Sir Howard Cooke former Governor General of Jamaica was an outstanding Jamaican woman.  Like her late husband, she was first a school teacher and a farmer.  She continued in the spirit of voluntarism and took pride in serving in many areas of national life.  It is not surprising therefore that when she was approached to be the patron of the Jamaica Network of Rural Women Producers (JNRWP), she willingly accepted.

At every opportunity she proudly reminded the group that she was a country girl and a farmer.  While they smiled at her candidness, they felt comfortable in her presence even as they basked in the beauty and grandeur of Kings House and enjoyed the sumptuous meals which sometimes included products from their garden.  From all accounts Lady Cooke and Sir Howard were avid back yard gardeners.  They also personally supervised the maintenance of the grounds of Kings House during their tenure 1991-2006.

Lady Cooke was therefore the founding patron of the JNRWP.  The network actually started as part of the Outreach component of the Vice Presidency for Research at the then newly founded College of Agriculture, Science and Education, (CASE).  The main sponsor was the Inter American Institute for co-operation in Agriculture (IICA).  The then Bureau of Women’s Affairs (now, the Bureau of Gender Affairs) was a major partner in its formation.  The Trustee of the organization came from the Rural Agricultural Development Authority (RADA).

The condition of Rural Women

In recent years there has been increased interest in the role of women in economic and social development and the inequality between men and women.  However, the data on women’s work and economic contribution is incomprehensive despite the improvement in gender awareness worldwide.  Even when the data is available, it is not used sufficiently by planners especially as it relates to women in agriculture and rural development.  Moreover, not so long ago women were not able to access credit from banks if they were not accompanied by their husbands.

Lady Cooke demonstrated that as the female partner in her household her decision making powers were not limited and her opinion mattered.  She was therefore an ideal patron for the Network which included women from all levels of the society at varying socio economic and educational achievements.  Moreover, Lady Cooke made her residence available for all the major functions of the Network including the celebration of International Rural Women’s Day, and even for meetings.  Of course she must have had the blessings of her husband as it was clear that a collaborative partnership existed in their relationship.

The Jamaica and Caribbean Networks of Rural Women Producers

In addition to the decision taken at Beijing to honour rural women in 1995, IICA, in collaboration with CASE conducted a survey in Jamaica in order to determine how best to empower Jamaica’s rural women.  Based on the results of that survey the decision was taken to equip Jamaica’s rural women to become self-reliant so that they may be empowered to improve their socio-economic status and by extension that of their communities and the country as a whole.

IICA and other organisations including the Rural Agricultural Development Authority, (RADA), launched the Jamaica Network of Rural Women Producers under the distinguished patronage of Her Excellency, the Most Honourable Lady Cooke in May 1999.  IICA, Jamaica seeks to support agribusiness and micro-enterprises development with emphasis on the participation of women and youth in agricultural development. Among the strategies to achieve this objective is the promotion of a rural women network in Jamaica that would be linked with networks in Latin America and the Caribbean.  The Caribbean Network (CANROP) was launched in July, 1999.  In her capacity as the Patron of the Jamaican Network Lady Cooke was in full support of this expansion.

As a farmer herself, Lady Ivy Cooke was very supportive to the rural women producers.  She was a gracious host, a kind and helpful person, who never forgot her roots nor lost touch with the common folk.  According to Prime Minister Andrew Holness, “Lady Cooke served the nation well. She was passionate about education, child development, guidance and counseling.”  She also contributed to national development by facilitating the progress of the Rural Women Network of Jamaica and the Caribbean.

The senior international correspondent of the Vision Newspaper Canada, Hopeton O Connor-Dennie paid tribute to Lady Cooke on her passing referring to her as “someone who stood by her husband through thick and thin, a woman of grace and a model of dignity” – a most fitting tribute to a most deserving daughter of our Jamaican Soil which the rural women networks fully endorse.

Jamaica and the Caribbean are better off because of her tenure on this rock.  Walk good my friend – Lady Sylvia Lucille Ivy Cooke!!!