Perspective: President Trump has blocked the sale of the chip firm INTEL to Broadcom on security concerns.

We reported on the revolving door at the Trump’s White House recently in Vision Newspaper.  Today Trump tweeted that CIA DIRECTOR will replace Tillerson as Secretary Of State.

Rex Tillerson visited Jamaica about three weeks to a month ago.  Vision Newspaper reported him meeting with PM Holness at a joint press conference at Jamaica House.

It is not clear what has led to the falling out with Trump.  It appears very risky to be in a Trump White House.

Tillerson was a former Exon Executive who went to work for Trump as his top diplomat. Working for Trump proved to be more slippery that the oil he worked with before.

It appears that he did not resigned, but instead was fired. What a pity!  We wish him all the success in his future endevours. 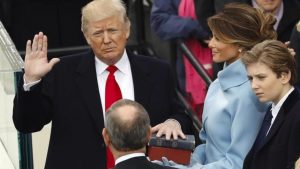