No Loss of life 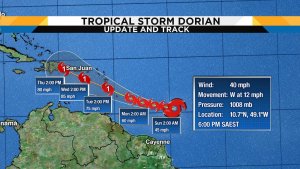 Vision Newspaper can report that there has been no loss of life and minimal property damage in Barbados following the passage of Dorian. Our impeccable source has given us this update. The storm has passed, but rains are expected.

Water and light are intact.

We hope that if there is flooding residents have taken heed and went to higher ground for safety as advised. Their PM Hon. Mia Mottley and her government must be relieved at this time. “Three or four districts have any minor dislocation”

Barbados is a small Caribbean island which got Independence from Britain in 1966. It has a parliamentary democracy. A Prime Minister and a population of approximately 300, 000 people and is located in the lesser antilles. English and creole is mainly spoken there. They have a stable democratic government.

We at Vision are relieved that Barbados has feared the worst so far. Further details will be supplied in coming hours or days.