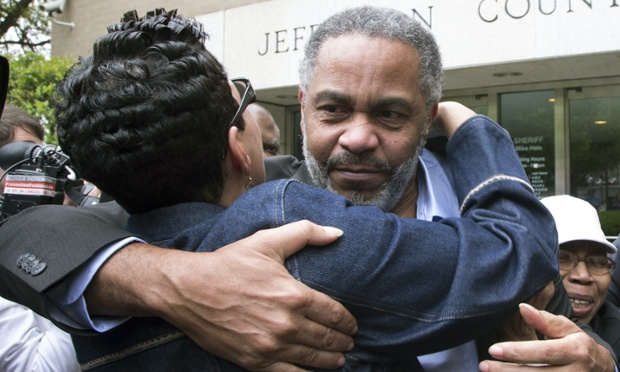 BIRMINGHAM, Ala. _ A man who spent nearly 30 years on Alabama’s death row walked free two days after prosecutors acknowledged that the only evidence they had against him couldn’t prove he committed the crime.

Ray Hinton was 29 when he was arrested for two 1985 killings. Freed on Friday at age 58, with grey hair and a beard, he was embraced by his sobbing sisters, who said “thank you Jesus,” as they wrapped their arms around him outside the Jefferson County Jail.

Hinton had won a new trial last year after the U.S. Supreme Court ruled that his trial counsel was inadequate. Prosecutors on Wednesday moved to drop the case after new ballistics tests contradicted those done three decades ago. Experts couldn’t match crime scene bullets to a gun found in Hinton’s home.

“I shouldn’t have sat on death row for 30 years. All they had to do was test the gun,” Hinton said.

The state of Alabama offered no immediate apology.

“When you think you are high and mighty and you are above the law, you don’t have to answer to nobody. But I got news for them, everybody who played a part in sending me to death row, you will answer to God,” Hinton said. “They just didn’t take me from my family and friends. They had every intention of executing me for something I didn’t do,” Hinton said.

Hinton was arrested in 1985 for the murders of two Birmingham fast-food restaurant managers after the survivor of a third restaurant robbery identified Hinton as the gunman. Prosecution experts said at the trial that bullets recovered at all three crime scenes matched Hinton’s mother’s .38 calibre Smith & Wesson revolver. He was convicted despite an alibi: He had been at work inside a locked warehouse 15 minutes away during the third shooting.

“The only thing we’ve ever had to connect him to the two crimes here in Birmingham was the bullets matching the gun that was recovered from his home,” Chief Deputy District Attorney John R. Bowers, Jr. told The Associated Press on Thursday.

The U.S. Supreme Court ruled last year that Hinton had “constitutionally deficient” representation at trial because his defence lawyer wrongly thought he had only $1,000 to hire a ballistics expert to rebut the state’s case. The only expert willing to take the job at that price struggled so much under cross-examination that jurors chuckled at his responses.

Attorney Bryan Stevenson, who directs Alabama’s Equal Justice Initiative, called it “a case study” in what is wrong with the U.S. judicial system. He said the trial was tainted by racial bias and that Hinton, an impoverished African-American man, did not have access to a better defence.

The independent experts Stevenson hired to re-examine this evidence after taking on Hinton’s case in 1999 “were quite unequivocal that this gun was not connected to these crimes,” he said. “That’s the real shame to me. What happened this week to get Mr. Hinton released could have happened at least 15 years ago.”

Stevenson then tried in vain for years to persuade the state of Alabama to re-examine the evidence. The bullets only got a new look as prosecutors and defence lawyers tangled over a possible retrial following the Supreme Court ruling.

The result: Three forensics experts could not positively conclude whether the bullets were fired from Hinton’s revolver, or whether they came from the same gun at all, according to the state’s request to dismiss the case against Hinton. Bowers said the “bullets were so badly mutilated that they did not have the necessary microscopic markings to make a conclusive determination.”

“We’ve allowed too many people to assert things in court that are not credible or reliable, painted over with this kind of scientific expertise which means there could be a lot of wrongful convictions,” Stevenson said.