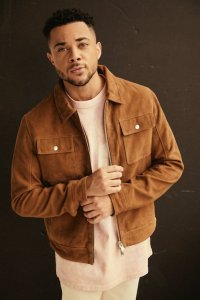 “I very much appreciate this (Blue & Bougie) award!” Creegan shared.

“As a proud product of Jamaican roots and Westchester county this means a lot.”

After having stints as a sportswriter and on-camera host at ESPN, Yahoo Sports, VICE Media and Bleacher Report, the acting bug took hold of him. A sketch he created in a Jamaican accent went viral and Oprah Winfrey’s team caught wind of it. He was cast as DESMOND in the Oprah network’s hit drama David Makes Man in 2018 and he never looked back. Aside from Law & Order: Organized Crime, Nick is a series regular on BATWOMAN. His character MARQUIS JET transitions into the show’s new version of the iconic villain The Joker, and Nick is the first actor of color to portray the role.

“Nick has made the transition from sports journalist to having a recurring role on TV. The entire Westchester community is proud of this talented homegrown actor,” Blue & Bougie executive Anthony Turner said.