An Anthem for Peace and Love 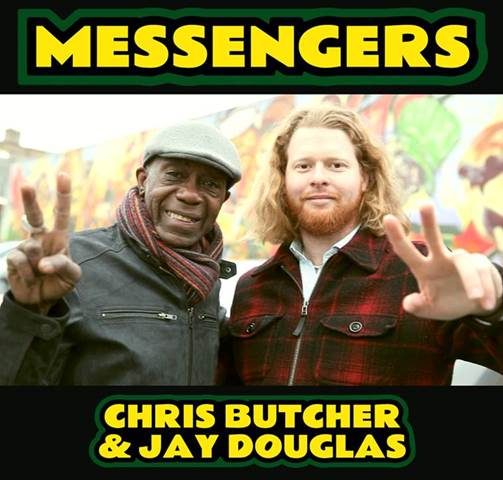 Two of Toronto’s iconic musicians, reggae master and soulful singer Jay Douglas and outstanding trombonist/composer Chris Butcher (of the Heavyweights Brass Band), have teamed up to write, record, and release “Messengers,” an anthemic  reggae single and video that aims to be the change we want to see in this world by spreading the word of peace and love. The two recorded an instrumental version as well, for more varied radio play. For more info please visit www.jaydouglasmusic.com / www.chrisbutchermusic.com.

If there’s anything we need more of in today’s world, it’s peace and love. Jay Douglas and Chris Butcher bring that essential truth to the fore, and remind us of our crucial roles in creating that spirit. As the beautiful lilt of the song carries its gentle but insistent spiritual message, they encourage us to “Rise above hate and fear / Don’t be no chump.” Interesting – and intentional – how “chump” rhymes with a name we all know. 😉 As the song says, “We can build a bridge with peace and love.”

The centrepiece of the video is a huge “Reggae Lane” mural commemorating the immigration of an estimated 100,000 Jamaican immigrants to Toronto in the 1970s and 1980s. The video shows Jay & Chris strolling through the streets of the city’s Eglinton West neighbourhood, which both Douglas and Butcher called home; it’s also the locale of the mural and the heartland of Toronto’s Jamaican community – also known as “Little Jamaica.”

“Messengers” hearkens back to the spirit of Bob Marley, not only in its conscious, positive message, but also in its old-school, roots-reggae sound and production style: recorded as it was played, by a band, live, on a few instruments, all recorded in the same room at the same time.

“‘Messengers’ is a joint project intended to spread positive vibrations,” says Butcher. “Jay and I are trying to create unity in a time when others are trying to divide us. It’s about the golden rule: Do unto others as you would have them do unto you.”

The fact that these two musicians of different generations and widely differing backgrounds both ended up making music together in Toronto, let alone creating this anthem together, offers testimony to the concept of the song.

Jamaican-born and Toronto-based, Douglas is a veteran in the entertainment business, performing a wide-ranging repertoire of American blues, West Indian rhythms, and jazz standards. From the early ’60s, through to the late ’70s, Douglas fronted the R&B/soul/funk/reggae group The Cougars. Jay has performed around the world, and at Toronto’s Canadian National Exhibition, and Yonge & Dundas Square. Jay has won NOW Magazine’s Toronto’s Best R&B Act, Male Reggae Vocalist of the Year at the Annual Toronto Reggae Awards, and a 2012 JUNO Award nomination. He was a crucial part of the landmark 2008 Jamaica to Toronto historical compilation, and has collaborated with many of the most important artists in Jamaican music.

Winnipeg-raised and now alternately based in Toronto and New Orleans, Butcher is firmly established as a representative of the global music village, transcending genre and cultural pre-disposition. He leads the Heavyweights Brass Band. Combine that with his extensive experience as a sideman – playing/recording alongside the likes of The Treme Brass Band, Delfeayo Marsalis & The Uptown Jazz Orchestra, Jane Bunnett, The Mad Caddies, Hilario Duran, Archie Alleyne, QuiQue Escamilla, Ernest Ranglin, and Giovanni Hidalgo – plus his work as a radio host/producer, as well as his role as an educator/community builder with Street Brass, and it’s clear that he’s building a wide-ranging, influential career in music. In 2015 he was awarded Emerging Artist of the Year at the Premier’s Awards for Excellence in the Arts.