BronzeLens Returns As A Virtual Experience 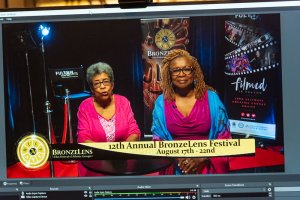 The global pandemic of COVID-19 remains a very real issue and as a result, we decided to present BronzeLens as a virtual experience,” said Kathleen Bertrand, Founder and Executive Producer of the BronzeLens Film Festival. “BronzeLens was founded to provide salient information and serve as a catalyst for creating opportunities for filmmakers of color. This year we are presenting our largest collection of Official Film Selections, a series of multifaceted Powerhouse panels, workshops and demos, and our exclusive signature events.”

Of the more than 180 official selections that will be screened, 63 are world premieres and 15 are from returning filmmakers. The diverse line-up of films come from Brazil, Burkina Faso, Canada, China, Côte d’Ivoire, Ireland, India, Israel, Ghana, the Netherland, the United Kingdom, the United States, and the Americas.

“Our 2021 film selections are exceptionally creative. Many of the documentaries include original music, and there are movies with thought-provoking, finely crafted storylines surrounding Afrofuturism,” said Deidre McDonald, Artistic Director of the BronzeLens Film Festival. “Over the years we have remained resolute to seeking and giving voice to the authentic stories of people of color. Diversity and inclusion have always been at the forefront of why we do what we do. We have also taken pride in the caliber of programming and panels we have sought to provide which allow attendees to have access to information from leaders in the film industry.”

For the complete list of the 2021 Power House Programming and Official Film Selections go to BronzeLens.