As already observed and reported on in Vision Newspaper there has been a boom in construction and related infrastructure development in Jamaica.  The Chinese have been assisting with the actual construction and financing.  Their Chinese Exim Bank has been providing support to the respective Jamaican governments both PNP and JLP.
Decline in Unemployment
Due to the perceived prosperity since the Andrew Holness assumed the reins of power in 2016 local and International pundits have been heaping praise on the government for its prudent management of the economy.  Inflation has been between 4 to 5 percent and plans are afoot for it to fall even further.  Unemployment is at record levels not seen before in this country of 8 or so percent. There has been a fall in our debt to GDP.  In short we are collecting more taxes and paying down the national debt at a reasonable rate according to the IMF. Interest rates to small and other businesses has dropped from 15 percent to between 7 and 8 percent.
Infrastructure 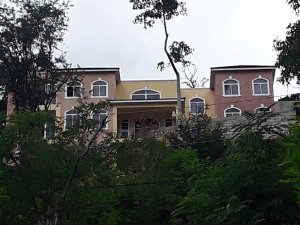 Residential property just completed in upper St. Andrew. It is an imposing structure of two levels and is well appointed with excellent colour scheme perched on a hill with a breathtaking view of our capital city.

Roads and bridges are being built or resurfaced which has stimulated the local economy.  New water mains are being laid and rehabilitation of existing ones being done.  The face of Jamaica is being dramatically transformed.  Tourist arrivals are up to recod levels. Two million arrivals between November 2018 to June 2019.

Despite the gains, there have been barnacles retarding our growth like crime and low production.
The enclosed picture of a massive building located at 58 Half-Way-Tree, Road in Kingston is a prime example of this boom in construction. The Most Honourable Usain Bolt has been investing in Jamaica and is believed to be an investor in the said 58 Half-Way-Tree Road project.
We have just touched the surface in this look at our economy.
What is your perspective?  This is ours.
Hopeton O’Connor-Dennie is Veteran journalist and Senior International Correspondent for Vision Newspaper Canada.