Customs Law Amendments to be Tabled by End of March 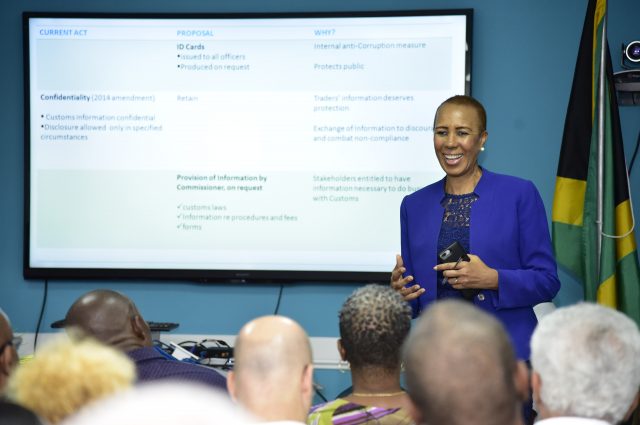 Minister of State in the Ministry of Finance and the Public Service, Hon. Fayval Williams, speaking at a Jamaica Customs Agency stakeholders meeting at the entity’s head office, downtown Kingston on Friday (February 16).

The Ministry of Finance and the Public Service, is looking to table amendments to the Customs Act in Parliament by the end of March 2018.

She was speaking at a stakeholder consultation to get feedback on the changes at the JCA’s downtown Kingston head office on Friday (Feb. 16).

Among the amendments being proposed are: inclusion of terms from the Custom’s Asycuda system into the legislation; changes in warehousing procedures; changes in enforcement to allow customs officers to be armed; changes to licensing and registration of some stakeholders; inclusion of advance cargo loading notice; as well as modifying the process of discarding goods received by the agency.

Senior Director, Legal Affairs at JCA, Hazel Edwards, said that “the idea behind all of the reforms is for government, customs, public sector partners, private sector partners to work together to create opportunities and to resolve the difficulties that we are having.”

She said that the agency looks forward to feedback from the various stakeholders.

The agency began consultations including meetings and presentations with stakeholders in late 2017.