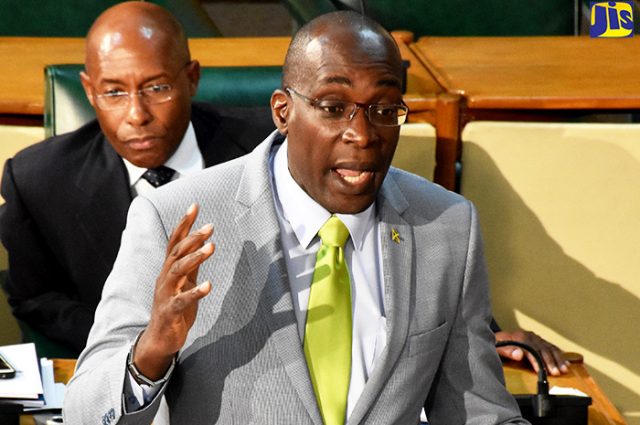 Photo: Education, Youth and Information Minister, Senator the Hon. Ruel Reid, makes his contribution in the Senate on March 11. Listening in the (background) is Deputy President, Senator Aubyn Hill.

Education, Youth and Information Minister, Senator the Hon. Ruel Reid, says he will be meeting with heads of all tertiary institutions for discussions aimed at ensuring that Government support to the sector is targeted at areas of national priority.

The Minister, who was speaking in the Senate on March 11, said he has already signalled his intention to hold such talks with the administration of the University of the West Indies’ (UWI) Mona campus.

Finance and the Public Service Minister, Hon. Audley Shaw, in his opening Budget presentation on March 9, announced that the interest rates on loans from the Students’ Loan Bureau (SLB) will be reduced for selected areas of study.

The objective is to ensure greater alignment of education and training with the job market.

For study in the areas of Maritime and Logistics, Agriculture, Engineering, and Information and Communications Technology, interest rates will decline from 9.5 per cent to six per cent.

In addition, the interest rates on ‘Pay As You Study’ loans will be lowered from 9.5 per cent to six per cent, and for postgraduate loans, the rates will move from 13 per cent to 9.5 per cent.

Meanwhile, the Education Minister, in response to a suggestion from Opposition Senator Wentworth Skeffery for the Government to find additional ways to finance tertiary education, said that the Administration is not looking at putting any additional funding mechanism in place at this time.

He noted that in addition to the SLB, which provides 100 per cent of tuition for study at approved institutions in Jamaica and the regional campuses of UWI, support is also provided through the Jamaica Values and Attitudes (JAMVAT) Programme.

JAMVAT targets tertiary students who qualify for admission but are financially challenged.

“Students who access this programme are given the opportunity to participate in the development of the nation’s social capital through their contribution of 200 hours of public service, and, in response, the Government pays 30 per cent of the student’s tuition cost, which does not exceed $350,000 per annum,” he informed.

Senator Reid said the Government will also be approving more accredited universities, which will engender competition in the sector and drive down the cost of tertiary education.