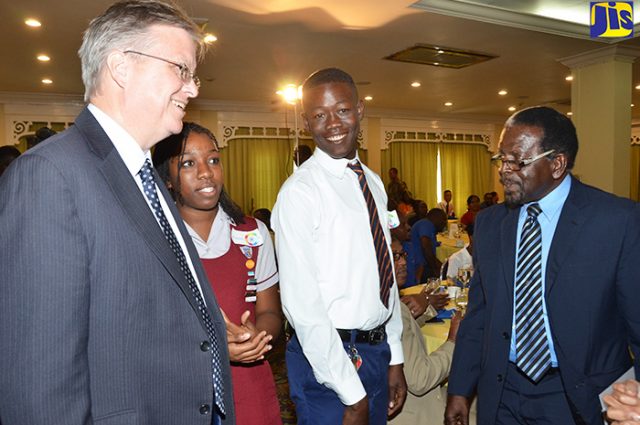 Photo: Speaker of the House of Representatives, Hon. Pernell Charles (right), and British High Commissioner to Jamaica, His Excellency David Fitton (left), share in light conversation with student of the St. Andrew’s High School for Girls, Ashleigh Onfroy (2nd right); and Javon Downie from St. Andrew Technical High School. They were at a Youth for Peace Rally staged by the Houses of Parliament at The Knutsford Court Hotel in New Kingston on Monday (March 13). The youth for peace rally was held as part of activities marking Commonwealth Day under the theme ‘A Peace-building Commonwealth’.

Prime Minister the Most. Hon. Andrew Holness, says the Government is committed to the building of a peaceful society in keeping with Goal 16 of the 2030 Agenda for Sustainable Development.

This, he noted, is aligned with Vision 2030 Jamaica – National Development Plan, goal two of which aims to ensure a secure, cohesive and just society.

“(It) reflects the Government’s commitment to addressing the high incidence of crime and violence, which undermines productivity and engenders hopelessness in society,” he said, adding that “there can be no development without peace”.

The Prime Minister further noted that by reducing crime, the Government intends to foster a more favourable environment for economic growth and job creation, thus paving the way for Jamaica to become “the place of choice to live, work, raise families and do business”.

Mr. Holness’ comments came in a message read by student of the St. Andrew’s High School for Girls, Ashleigh Onfroy, at a Youth for Peace Rally staged by the Houses of Parliament at The Knutsford Court Hotel in New Kingston on Monday (March 13).

For his part, Speaker of the House of Representatives, Hon. Pearnel Charles, Sr., noted that Parliamentarians strive to create the legislative framework for a just and peaceful society.

He noted that Jamaica is not alone in its pursuit of justice and peace.

“The Commonwealth is a family working together for international peace and security. All sectors of society need to play their part; just like the Commonwealth Day logo, each segment of society is a necessary piece of the puzzle,” Mr. Charles said.

The rally was held as part of activities organised by the Houses of Parliament to mark Commonwealth Day under the theme ‘A Peace-building Commonwealth’.

Commonwealth Day is celebrated across the Commonwealth of countries by young people, schools, communities and civil society organisations on the second Monday in March every year.

It provides an opportunity to promote understanding on global issues, international cooperation and the work of Commonwealth organisations.