Spice’s New Single “Send It Up!”

Elaine is one of the Greats

TOKYO, JAPAN - AUGUST 03: Elaine Thompson-Herah of Team Jamaica celebrates after winning the gold medal in the Women's 200m Final on day eleven of the Tokyo 2020 Olympic Games at Olympic Stadium on August 03, 2021 in Tokyo, Japan. (Photo by David Ramos/Getty Images)

The Minister of Culture, Gender, Entertainment and Sport, the Honourable Olivia Grange, has hailed the historic performance of Jamaica’s Elaine Thompson-Herah in the Olympic Games. 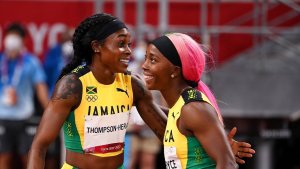 The Jamaican finished ahead of Christine Mboma of Namibia (21.81) and Gabriella Thomas of the USA (21.87)

The other Jamaican in the final, Shelly-Ann Fraser-Pryce, finished fourth in 21.94 seconds.

With today’s win, Thompson-Herah becomes the first woman to win both the 100 and 200 meters at separate Olympic Games after also taking the sprint double at RIO 2016.

“Elaine is such an amazing athlete. It is such a pleasure to watch her run. All of Jamaica is proud of this new record that she has received. The only women to successfully defend  both 100 and 200 meters at an Olympics. She is definitely one of the greats. And I’m so excited to see what else she will do, because I believe she has a lot more in Her.

I also wish to congratulate Shelly-Ann on a very valiant effort. We continue to be proud of the way that Elaine, Shelly-Ann, Natoya and all members of Team Jamaica are representing our country in Tokyo.”

Source office of the Prime Minister