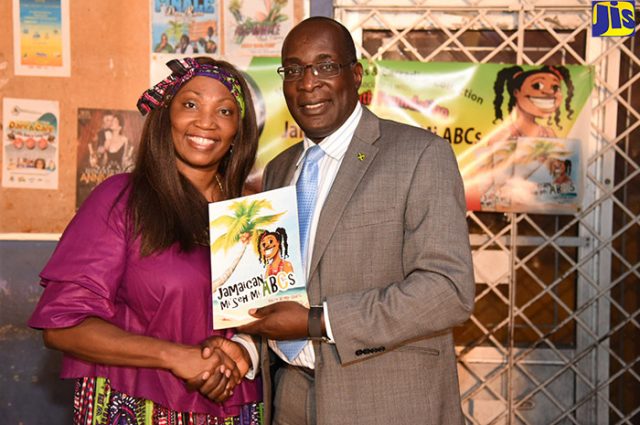 Minister of Education, Youth and Information, Senator the Hon. Ruel Reid, says Patois must be regarded as a first language for persons who have little exposure to the English language.

The Minister argued that there should be an acceptance that the first language of Jamaica is Patois, and teachers need to always consider that reality as they do the “transition” of the dialect to standard English.

“The best practice is to teach standard English, for those of us who come out of a culture of Patois, as a second language,” he said.

Senator Reid was delivering the keynote address at the launch of the book – ‘Jamaican Mi Seh Mi ABCs’ – written by Communicator Valrie Kemp-Davis, in August Town, St. Andrew, on July 31.

The Minister said educators must be alerted to how children understand English and Patois, especially during the early years of enrolment in the formal school system.

“If you are teaching students who can’t understand in the language that you are speaking, then learning is not taking place,” he told the gathering of school- children, community leaders and personnel from the University of the West Indies, Mona Campus, and the University of Technology (UTech).

He said the book has brought back the nation to the reality of understanding Patois and standard English.

The Minister told the audience that while Patois is being validated, there is an opportunity for the learning of English, Spanish and other languages as that is “what education is about.”

Also at the launch were: Member of Parliament for Eastern St. Andrew, Hon. Fayval Williams, who is also State Minister in the Ministry of Finance and the Public Service; and Sub-Officer in charge of the August Town Police Station, Inspector Stephen Taylor.