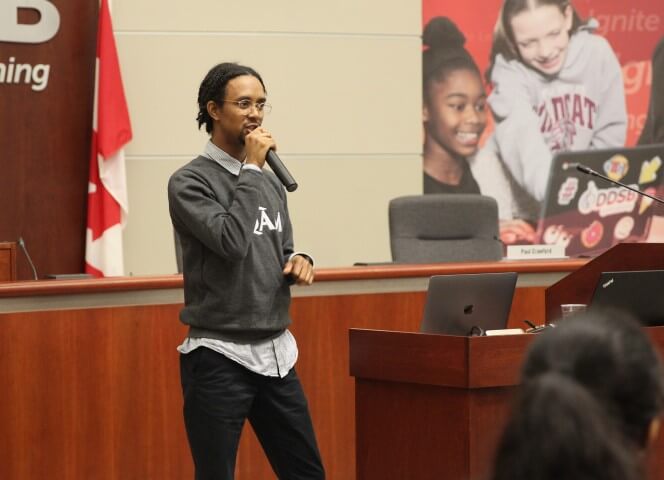 “Le raison d’être” translates in English to “the reason or justification for existence.”

Franconnexion is an annual bilingual conference for Grade 9 and 10 Core and French Immersion students in the DDSB.

This year the conference was held on December 6th at the Education Centre in Whitby, with eight DDSB secondary schools participating.

Living in Another Language

The keynote speaker, Reuben Ramsay, opened the day by sharing his story of bilingualism with students. “There’s something really special about living in another language,” enthuses Ramsay.

Ramsay is an alumnus of O’Neill Collegiate Vocational Institute in Oshawa and was in the Core French program. In post-secondary he attended Durham College and received a Diploma in Public Relations, but did not continue with French at that time.

It wasn’t until he took a trip to Montreal, that his love for the French language and culture was rekindled. After that, he began travelling to countless places all over the world, all the while growing his French, “I followed my passion, and it led me to myself. Learning a language is like being in a relationship. When you dedicate yourself to something, you’ll get something even greater in return.”

Ramsay concludes, “Bilingualism is a spectrum, you will always be learning and growing. There are so many opportunities waiting for you when you finish high school.”

Afterwards, the breakout sessions offered students endless possibilities for a future in bilingualism.

Students learned about the Diplôme d’Études en Langue Française (DELF) exam they can take in Grade 12 to receive an internationally recognized diploma of French proficiency. They heard from representatives of exchange programs such as the Canadian Education Exchange Foundation (CEEF). Finally, students spoke with representatives from post-secondary institutions Glendon College and Laurentian University about continuing French at the post-secondary level.

Wood concludes, “Franconnexion is a really great opportunity for students. It gives them a reason to continue, le raison d’être.”