Justice Michael H. Tulloch, who is reviewing Ontario’s Regulation 58/16 on police street checks, (also known as carding) is set to hold his first public consultation in Thunder Bay on February 1.

Government Committed to Dismantling the Ecosystem of Crime – PM Holness 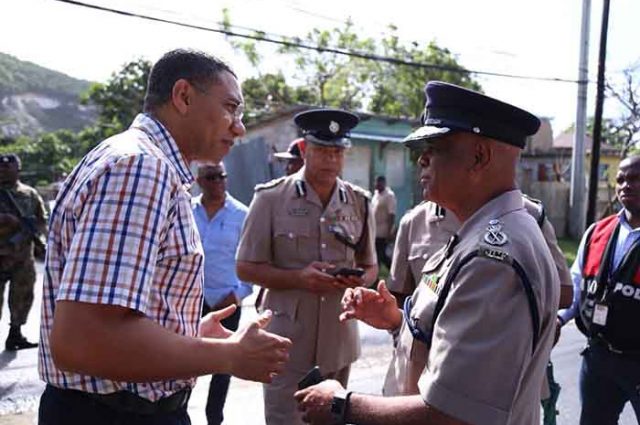 Prime Minister Andrew Holness has reassured stakeholders of the Government’s commitment to restoring public safety and the rule of law order while dismantling the ecosystem of crime in the parish of St. James and the wider Jamaica.

The Prime Minister, who yesterday (Saturday, January 28) visited the parish now under a State of Public Emergency, met with stakeholders to get a firsthand view of current situation in the parish. He also visited two lock ups where detainees are being held.

The stakeholders were drawn from several sectors including members of the business, tourism, church, and civic communities in the parish.

Prime Minister Holness fielded questions about the State of Public Emergency in the parish and assured players in the tourism sector that the Government has a comprehensive plan to limit any impact on the sector.

In that regard, Prime Minister Holness announced that the Cabinet on Thursday approved J$100M for the Jamaica Tourist Board to increase advertising and marketing for the sector. The Tourism Minister Ed Bartlett is currently leading activities and speaking with stakeholders.

Prime Minister Holness noted that members of the security forces would assess and announce any changes to operational business hours in the parish.

In the meantime, Prime Minister Holness and the security chiefs toured several communities including Flankers and Salt Spring visited the Freeport and Barnett Street lock ups where detainees are being held to get a firsthand view of operations in the State of Public Emergency.

The Prime Minister expressed satisfaction with the conduct of members of the security forces during the state of emergency.

During the tour of the Barnett Street lock up the Prime Minister met with the Public Defender Arlene Harrison Henry and some relatives of detainees.

The Public Defender noted that her office has been receiving excellent cooperation from the security forces in executing her duties.

Prime Minister Holness noted that he expects the processing of detainees will be much faster in the coming days and assured relatives that it is not the intension of Government to have a permanent State of Public Emergency in the parish.

However, the Prime Minister said the violence producers must be caught.

He further appealed to relatives and residents who were at the Barnett Street lock up to tell what they know and help the security forces find illegal guns and criminals.