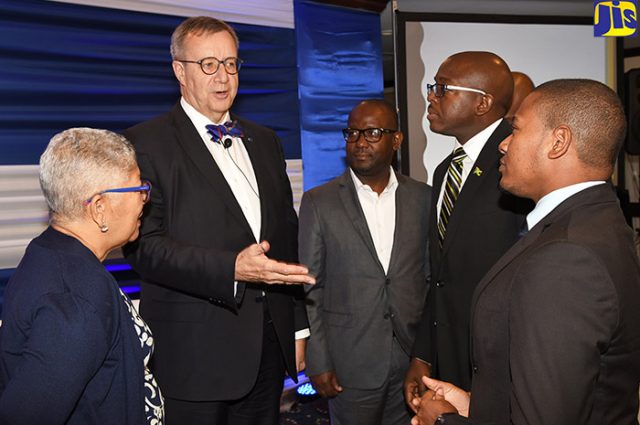 Programme Director of the National Identification System (NIDS), Warren Vernon (right), greets former Estonian President, Toomas Hendrik Ilves (left), at a panel discussion hosted by the Office of the Prime Minister and the Inter-American Development Bank (IDB) on digital technology, at The Jamaica Pegasus hotel in New Kingston on February 27.

Programme Director of the National Identification System (NIDS), Warren Vernon, says Jamaica is closely examining countries on the 2017 Digital Evolution Index for best practices in the implementation of NIDS.

The 2017 index tracks the progress countries have made in developing their digital economies and integrating connectivity into the lives of billions.

They include Singapore, Israel, Hong Kong, the United Kingdom, Japan, the United Arab Emirates and, in particular, Estonia.

Located in the Baltic region of Northern Europe, Estonia has arguably the most highly developed national identification card system in the world.

“There has never been a (security) breach in Estonia with their (national identification) system. They are also similar to us, in that they started from zero and then built out an infrastructure supported by services for the people,” Mr. Vernon said.

He was speaking to JIS News following a panel discussion with former President of Estonia, Toomas Hendrik Ilves, on the Estonian digital experience, at The Jamaica Pegasus hotel in New Kingston on February 27.

The discussion was hosted by the Office of the Prime Minister, in collaboration with the Inter-American Development Bank (IDB).

Mr. Ilves explained that the reason for having a national identification system was to foster better integration of the people and services with the digital world.

“The requirement for identification is pretty universal, so what we decided to do was wrap it up all in one package. You don’t need to have birth certificates and marriage certificates. IDs are part of any modern society, all we did was to wrap it up into a single one-stop shop,” he said.

Mr. Ilves also emphasised the difficulty of breaching the system, as each entry by an individual produces a log file identifying the entrant and the files accessed.

He recounted an incident involving a policewoman who wanted to enquire about her partner and accessed the system as an administrator, but was soon after discovered and arrested.

Meanwhile, providing an update on NIDS, Mr. Vernon informed that stage two of the bidding process is under way and that there has been an improvement in the conversation on the system among the citizenry.

“The town halls (meetings) have been very good. We find that people had a lot of incorrect information, but when we do the presentation and what the project is about, people are feeling much better and more aware,” he said.

“We have to keep getting the people involved; we have to keep building on the awareness level and also to make people participate in the process for them to understand the benefits,” he added.

NIDS is jointly funded by the Government of Jamaica and the Inter-American Development Bank at a cost of US$68 million.

First-phase registration is slated to begin with a pilot in September 2018 and proceed to a national roll-out in 2019.

The event was held under the theme ‘#JumpJamaica: Making a giant leap through Digital Technology’.