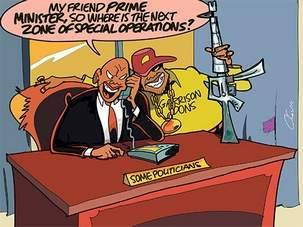 We were promised increase production instead we got increased violence. “Protection Rackets” and Extortion are the emergence of entities which is larger than individuals in the communities. It’s these entities whose business is violence. These are the thugs united in generating scale economies in violence with the output of a political strategy.

Therefore, the re-banded outdated “Curfews”; Zone of Special Operation (ZOSO) is a prelude to blame terrified citizens who know if they report a Don the moment the SOZO is lifted they are DEAD. Cause all the Dons in these areas would have been tipped off and flee. From my personal experience growing up in Spanish Town, in these ZOSO the police and soldiers tend to rely on the citizens to tell them where the Dons are but it is a game both innocent law enforcement officers and citizens are dragged into. Why haven’t we had a pack of well-trained dogs who can sniff out ammunitions if the government was serious about fighting crime?

“Do the communities have control over the guns and ammunition coming into the country? Can a community resident stop a bullet? Sure the community plays a part but the bulk of the responsibility is on the leadership to stop the guns and ammunition coming into the country, remove all political officials in any way involved in criminal activity or associated with known criminals and that’s most of them. Disband the garrisons and the gangs that control and terrorize law abiding citizens. It struck me that in a statement from the JCF they were able to identify I believe 12 criminal gangs operating in the Mount Salem area alone by name, and are only now moving to deal with them, maybe. With all the preamble and public announcements anyone in this ZOSO that are on the radar of the authority’s move and gone a long time. Hopefully, the community sensitization will have some effect until the soldiers and police move out and the gangsters move back in ” – Christopher Binns

The Construct of the Political Economy In Jamaican is not to Increase Production But Rather to Gain Economies Of Scale in Violence. “What scale economies mean in the world of production, is if we double all the inputs, we more than double the output. But the nature of the political economy is not to achieve scale economies in production rather we’re going to do it in violence. But it’s going to be the same concept.”

If you double the inputs into violence, you more than double the output. Now, the output in production is very simple. It’s just how much Gross Domestic Product (GDP) grows, or, as it were. What’s the output of violence? Policing in a colonial state like Jamaica is largely to cover-up the lack of social order to facilitate economies of scale in violence.