More Calls for Females to Pursue Careers in Science and Technology 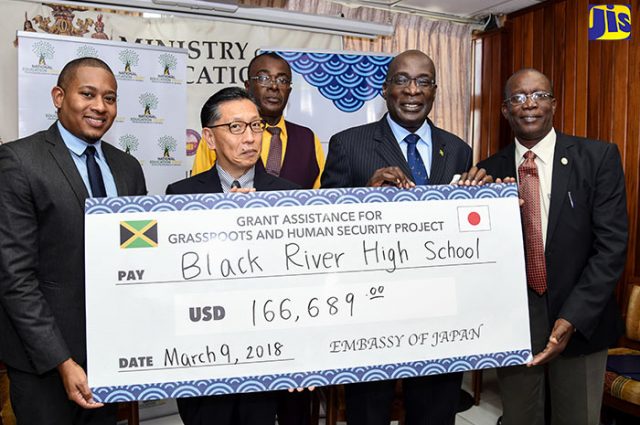 New classrooms are to be constructed at the Black River High School in St. Elizabeth and the Portland-based Fair Prospect Primary School at a total cost of  $31 million (US$257, 595).

The project is being undertaken through grant funding from the Government of Japan under the Japan Grassroots Human Security Project.

Minister of Education, Youth & Information, Senator the Hon. Ruel Reid, welcomed the assistance from the Government of Japan.

“Both Black River High and Fair Prospect Primary are in need of support. We intend to do further work and it’s on our budget to build out the capacity of Black River High School, so that they can come off the shift (system),” he said at the grant signing ceremony at the Ministry on Friday (March 9).

Senator Reid called on the students and teachers of both institutions to appreciate the investments being made.

“Don’t expect us to be making so much investment in our schools and we’re not getting returns, so we have to always encourage accountability and performance. We are encouraging discipline among our students and our teachers and all of this is putting together a package to build a better Jamaica,” he said.

Ambassador of Japan to Jamaica, His Excellency Hiromasa Yamazaki,  in his remarks,  said the resources being provided will ultimately strengthen the learning environment at the institutions.

He informed that the  grant signing ceremony was the sixth in Jamaica under the Japan Grassroots Human Security Project since the start of his tenure five months ago.

Chairman of Black River High School, Vincent Guthrie, expressed gratitude for the improvements to be undertaken.

“It’s a big boost. The challenge that the Black River High School faces is chiefly about classrooms space. The school has been on shift for several years…and has outgrown its capacity. Our big thrust now is to get the school off shift so one of our targets is to see if we can indeed get adequate classrooms, maybe about 10, to be able to take the school off shift,” he said.

Principal of Fair Prospect Primary, Juliet Bailey-Walters, said the institution of 212 pupils also faces overcrowding and has had to find innovate ways to accommodate students.

“We are very grateful, because I know that this will go a very far way to improve the ambiance of the school and improve teaching and learning,” she noted.

Through the Grassroots Human Security Project, the Government of Japan offers financial assistance for development programmes designed to meet the diverse needs in rural communities of developing countries