Kingston Jamaica The Johnny LIVE Comedy Bar is once again gearing up for an exclusive comedy feature this month. The successful Kingston based comedy club, staged on a Tuesday night by the Johnny LIVE Production team, is now in season three of it’s 2019 set at the Blue Room at the Phoenix Theatre on Haining Road in Kingston.

The series will be presenting it’s quarterly Johnny LIVE Comedy Bar Special on September 28 and 29 at the Shell Band Stand at Hope Gardens in Kingston and the Montego Bay Community College in St James respectively.

Previous Comedy Bar Specials featured the likes of US based comedians; Shuller King, Alfred Kainga and Drew Thomas. For the staging this month however the Johnny LIVE team has expanded their import to England and will be featuring young successful, St Elizabeth born London based stand-up comedian, White Yardie. 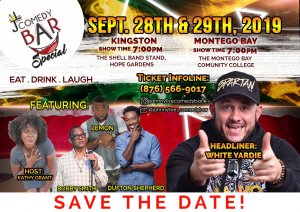 This is White Yardie’s first ever performance back in his Homeland and already the jovial comedian is super excited about showing Jamaica the act that has garnered him tremendous success predominantly in the UK.

“I feel definitely both Comedy Bar Specials will be successful and I’m excited that I can finally talk normal and ‘leggo’ some real patois on stage! When I perform overseas sometimes you have to ‘water down’ the Jamaican dialect so a wider audience can understand you,” White Yardie explained

White Yardie has been successful on the stand-up comedy circuit for more than four years and has sold out large venues in London like the O2 Indigo with his one man show ‘Straight Out Of Jamaica’. While gaining popularity on social media with multiple viral videos, he has also successfully toured his stand-up comedy showcase in North America and won the title of best comedian in the U.K. in 2015 and 2016.

Other acts billed for the Kingston and Montego Bay Comedy Bar Specials include; Lemon, Bobby Smith and Dufton Shepherd, both events will be hosted by Kathy Grant.