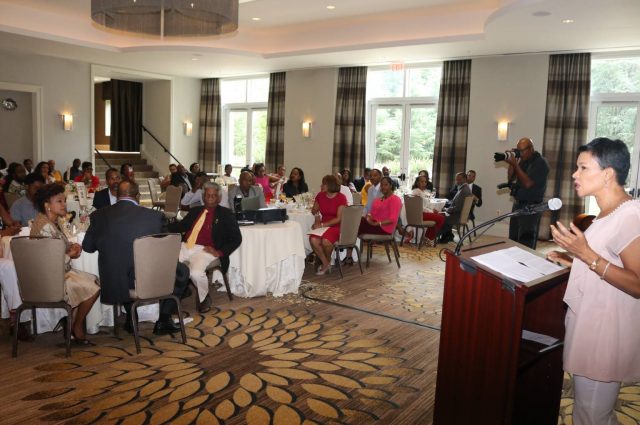 Jamaica’s Ambassador to the United States, Her Excellency Audrey Marks, delivers the keynote address at the Benevolent Missions of Atlanta (BMA) breakfast in celebration of Jamaica’s 55th year of Independence held at the Hyatt Regency Atlanta on August 13

Jamaica’s Ambassador to the United States, Her Excellency Audrey Marks, has lauded the contribution of the diaspora to the country’s development, particularly in the critical areas of health and education.

She said that up to July this year, there have been more than 133 diaspora-led health missions to the island, which have contributed US$6.7 million to the public health sector.

“In 2016, the diaspora organised 192 charitable missions and contributed US$8 million to Jamaica,” she noted.

She said that remittances, which account for more than 15 per cent of the country’s gross domestic product (GDP), go a far way in helping to cover medical and educational expenses for thousands of families in Jamaica.

Ambassador Marks was addressing members of the Benevolent Missions of Atlanta (BMA) at a special breakfast in celebration of Jamaica’s 55th year of Independence held on August 13 at the Hyatt Regency Atlanta.

She urged the members of the BMA to “continue supporting these various outreach efforts, as your contributions are truly making a difference”.

The Jamaican envoy said there is need for the strengthening of collaboration with the diaspora in advancing the economic growth agenda.

“The Government is of the firm belief that only through sustained growth will we be able to provide the quality of life and services that our people so richly deserve,” she noted.

“A priority focus for the Government is economic growth and job creation, which, I am here to affirm, is within our reach. The various business and consumer confidence reports and the declining unemployment rates are signs that we are on the right path,” Ambassador Marks said.

She is urging Jamaicans living overseas “to seriously look at investing in your own country. Other foreign investors from across the globe are taking advantage of the numerous investment opportunities that are available in Jamaica, and from which they stand to reap tremendous benefits”.

“We need our diaspora members to also partake in these investment opportunities and business prospects and to see these opportunities as a win-win for both you and your country at large,” she pointed out.

Ambassador Marks said improving citizen security is a priority of the Government and “we are thankful for the support received from the diaspora… as we seek to ensure that we tackle the current security concerns and restore public safety across the length and breadth of our beautiful island”.

The BMA was formed in 2005 by several Atlanta-based Jamaicans. Its mission is effectively harnessing and leveraging the time, talent, and resources of the Jamaica-United States community to assist disadvantaged and at-risk children in Jamaica and in the Metro Atlanta area.