International dancehall reggae artiste Spragga Benz seems to have a big hit in the making, as Second Chance, the movie in which he stars, continues on a trail of success.

After four full-house appearances, the first at the Savor Cinema in Florida, which earned a standing ovation, movie fans are in a frenzy to see the fourth show. This to be held in Philadelphia. 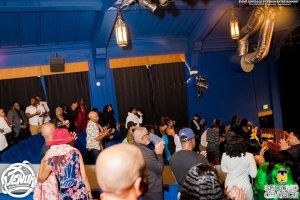 Fashion designer Jenelle Thompson, based in Philadelphia, purchased her ticket days ahead of the show and will be ready for a double dose when the cast goes to Queens, New York on May 14, 2022.

“Can’t blame anyone who is waiting for last minute to buy a ticket. This is a great show-piece with all the elements of discrimination, determination and survival.”

The theme is an excellent pick. Who in this world wouldn’t want a second chance in life, even the man who has been convicted.

“Getting a second chance could change around your entire life. And, if this message can reach every nation around the world, then every youth would try not to have a second chance. Just be doing good every single day.”

Spragga Benz, who had starred in Shottas- done 20 years ago, is anticipating a long run of the movie.

“When I got the script from Cleon James movie writer/director, I knew he was coming with something bigger than what I had expected, because Second Chance -unlike Shottas shows the flip- side of a world which can be made good, if only we realise there is not only a second chance, but a second choice of doing things.” said Spragga

The movie ia a story of a qualified rastafarian man who struggles to find a job in Corporate America.  Discouraged by his failures, he falls into a life of crime with high school friends.
Suddenly, a situation forces him to lean on his spirituality and religious upbringing to change his ways.