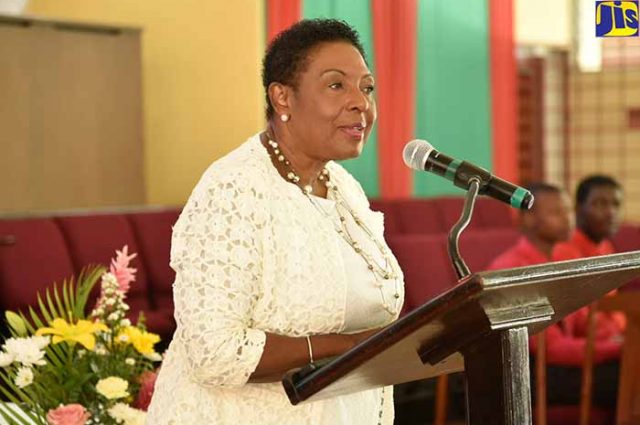 The Hon. Olivia ‘Babsy’ Grange, Gender & Women’s Affairs Minister spoke on equality … she highlighted the MDG and BEIJING accord.  “We are promoting gender based programmes to uplift the quality of life of women … income inequality being addressed.” To much applause.

“Women represent some 50 percent of the workforce.  Their participation in stem fields unfortunately are much less than men.  You can’t be what you can’t see.  We hail former Government Minister the late Madam Rose Agatha Leon” … Babsy Grange was the guest speaker at a function to mark the celebration of International Women’s Day 2018.

Opposition Spokesman on Gender, Mrs Valrie Neita used the celebration of International Women’s Day to congratulate women, teachers and nurses. Majority of political workers in our country have been women.  On many occasions are not encouraged to move from political workers to political leaders.  We need to put our women in winnable seats and stop established tokenism.  Bring forward the legislation to protect women.  We are calling for the enactment of the Sexual offenses Bill and offenses against the person. We are proud of our Jamaican women. We Congratulate those who serve in Parliament.  We note that we have a female Attorney General in Hon. Marlene Malahoo Forte.  Former Chief Justice,  just retired the Hon. Zalia McCalla to name a few.

Member of Parliament Deacon Ronald Thwaites, former Education Minister, under the PNP Led Portia Simpson Miller administration, underscored this view … “The proverbial Glass Ceiling has been scattered. Single baby mothers achieving  ….  the fulfillment of their dreams. This and other human development initiatives help to stimulate growth.”

Every day should be a real celebration of women. I reflect on my own mother Ivy M.A. O’Connor-Dennie, who was a sound educator and principal of her own school. Among her students were Hon. Olivia ‘Babsy’ Grange, government Minister in the Holness led JLP administration.

PM Holness allowed his own wife Juliet to be in Parliament as a MP. He never fails to uplift women.

Too many children do not have any contract with their fathers in particular. We need to honour our women more.