Aljira Announces November 18 Opening of Duron Jackson: The Missing – an Exhibition Confronting the Reality of Mass Incarceration in America

Perspective: Does Lisa “Jezebel” Hanna Have “Foot In Mouth Disease”? 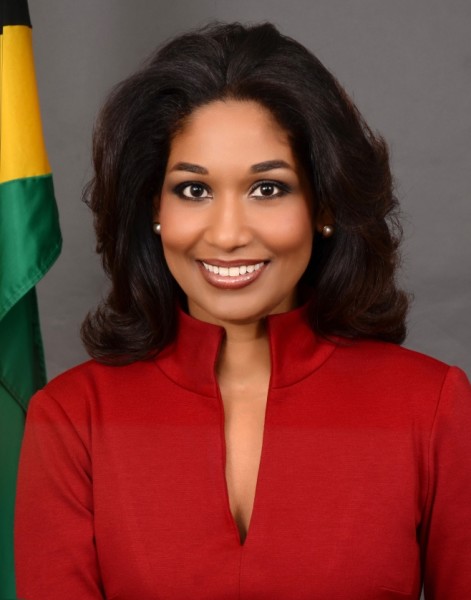 Dr. Peter Phillips, PNP and Opposition Leader in Jamaica has recently named Lisa Hanna, MP for Southeast St. Ann as Spokeswoman on Foreign Affairs & Foreign Trade. She was previously for Youth, Culture and Sports/Gender Affairs shadowing Hon. “Babsy” Olivia Grange. In Hanna’s first public utterance in this her new position, she has run into trouble by putting her foot in her mouth.

The accident prone former Youth Minister has not had a smooth transition after being appointed by Opposition Leader Dr. Peter Phillips to be Opposition Foreign Affairs Spokesman. This new appointment was seen as a promotion for Hanna, the under investigation MP for Southeast St. Ann.

She manufactured what could easily have been a diplomatic accident. In her first public utterance she (Hanna)  declared” an ambassador dead”. The supposedly dead ambassador  is very much alive. Egg white has plastered her pretty face. This is a classic case of “fake news” according to President Trump.

People are questioning the suitability of Hanna to occupy such a high profile position. JLP’s MINISTER Johnson Smith is the Foreign Affairs Minister etc.

As Foreign Affairs spokesman Hanna has to interface with foreign embassies through their bone fide representatives. They report directly to their foreign governments. These are accredited diplomats and ambassadors.

Lisa Hanna seem to have gotten her foot in her mouth also when she made critical comments about Internationally acclaimed incarcerated dancehall artiste Vybz Kartel, … accusing the authorities of turning a blind eye, in her accusation that he was doing recordings in prison. Kartel was convicted and put in prison when PNP was in Office. Jezebel Hanna did not produce any evidence to supported her claim. She later reported that her life was threatened. The police has not arrested anyone. Is this also a fake news/claim?

Vision Newspaper extensively reported a very public spat between Minister Grange and herself.  Hanna was trying to tarnish Grange’s image by falsely accusing her of financial irregularities in her Culture ministry. Hanna produced what turned out to be “bogus” figures to bolster her claim. Grange refuted her claim. It was quite a stand off.

We have no confidence in Lisa Jezebel Hanna, based on her utterances to date. What a pity!We hope she will not be a further embarrassment to herself and Jamaica. What is your perspective? This is ours.