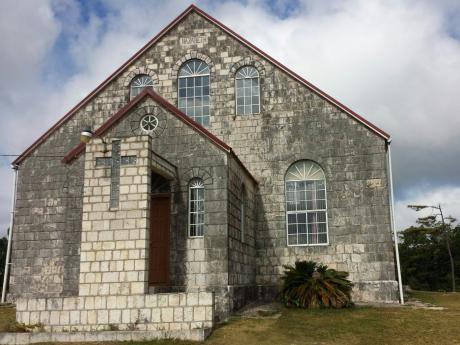 Bishop Stanley Clarke, who is the Presiding Bishop of the Moravian Church in Jamaica, is still in his post as others quit.

The alleged rape of a 15 year old teen, his arrest and charge of a Moravian Pastor Rupert Clarke 64, is turning the faith based churches/institutions in turmoil.

As the Moravians are embroiled in  this salacious sex scandal,  the President and Vice President have “volunteered” to step aside.  They also have a retired Bishop who is unaffected so far.

They have stepped aside in the wake of the revelation that there  may have lied as to what they knew and when, as a result of alleged email communication.

The President and Vice president in a surprised move, arising from the said Moravian church sex scandal, have walked away. These are the first known casualties of the highly publicized incident gripping the long established Moravian Church.

He is believed to have been trapped by an email he sent to a defrocked Pastor now disgruntled with the top  leadership of the church over his dismissal. He has become a whistle blower with alleged surname Thompson. Was the President et al caught in a cover up or lie?

On a more positive note the Moravian Church is well known for its work in establishing educational institutions across Jamaica. They were among the early missionaries, who even  before slavery officially ended in 1838,  established churches & other institutions to effect positive social and spiritual change on the island to ex slaves and the locals at large.

In the 1700s or so, was when their work began. Bethlehem Teacher’s College is among their flagship institutions. They have a church population of some 10,000 with 38 ministers of religion. They are managed by a Provincial Council and have a Presidential structure which runs the administration and a Bishop who overseas the spiritual aspects of the church in Jamaica W.I.

The Moravian Church community has a lot to be proud of in Jamaica and elsewhere.

All the mainline churches operating in Jamaica have at some time been stained by the conduct of their leaders and others connected to them. Sex scandals of altar boys, by priests who are sworn to celibacy, easily come to mind.  These abuses are well documented worldwide.

The Anglicans have had their sex scandals also.  One of their priests was killed by what police described as his ” homosexual lover.”  The priest was married to a school principal.

Other denominations have had their  sex scandals, but those did not get widespread publicity or were covered up.

The bad should not be used to condemn the outstanding contribution the faith based institutions have made to education, community and national development.

Food For The Poor

Food for the Poor, a Roman Catholic organization has been building houses etc. to house our less fortunate. Great job indeed!

The Seventh Day Adventists have built a great University in Central Jamaica, and have evangelized and fed the poor also. Their relief organization  (ADRA), helps in times of natural disasters.

He Who Is Without Sin …

We await those without sin to “cast the first stone”.  No stones are likely to be cast as we have all fallen short of the Glory of God.  We are all broken vessels in need of His Redemption.

“If there are no sinners, then there would be need for the church,.” So declared  The Rt. Rev. Dr. Alfred Reid, retired Bishop of the Anglican Communion in Jamaica & the Cayman Islands recently.

The church survived Saul’s assault on the road to Damascus, the disciples were so fearful of attacks from the Jews that they shut tight the doors they were meeting in the Upper Room. It has never been a smooth ride for the church. ISIS is widely believed to be actively plotting against our Christian Faith.

We do not condone distasteful conduct … “but the church mirrors the society;” Beverly an Adventist Sabbath School Teacher, in Western Jamaica declared in a telephone interview.

We do not gloat at anyone’s downfall.