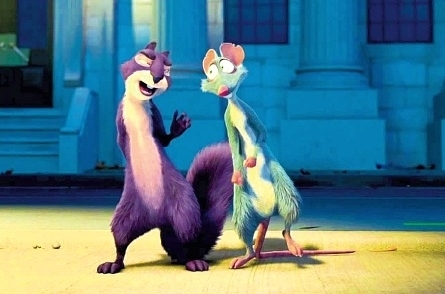 WHEN credits roll for the animated movie The Nut Job, Jamaican Wayne Carnegie’s input as a surfacing artist will be on that list.

Produced by Open Road Films, The Nut Job opens in North America on January 17. It features the voices of Will Arnett, Brendan Fraser, Liam Neeson, and Katherine Heigl.

The comedy revolves around a mischievous squirrel and his friend, a rat, who plan to rob a nut store.

Born in Spanish Town, 30-year-old Carnegie has lived in Toronto for the past decade. He was recommended to producers of The Nut Job

Weeks after submitting a demo-reel, Carnegie says he was contacted by The Nut Job executives, informing him he was on their team.

“I felt like a child walking into a candy shop, because of the various creative, technical artists I had the chance to meet and work with,” Carnegie said during an interview with the Sunday Observer.

While he has been on high-profile Canadian animation projects, including Waybulooo, Matt Hatter Chronicles, and the History Channel’s Tank Battles, Carnegie says The Nut Job is his biggest gig to date.

A graduate of St Jago High School, he enrolled at the Toronto Film School shortly after migrating to Canada. His job requires developing textures for digital media (usually for video games), movies, websites and television shows.

He expects significant spin-offs from The Nut Job.

“Regarding Toonbox Entertainment, I’m sure they have some amazing stuff lined up, but I can’t mention much about them.”

“I would love an invite from any Jamaican university to do live workshops on CGI modelling, texturing and rendering work flow,”

For the original report go to http://www.jamaicaobserver.com/entertainment/PICTURE-PERFECT_15370981