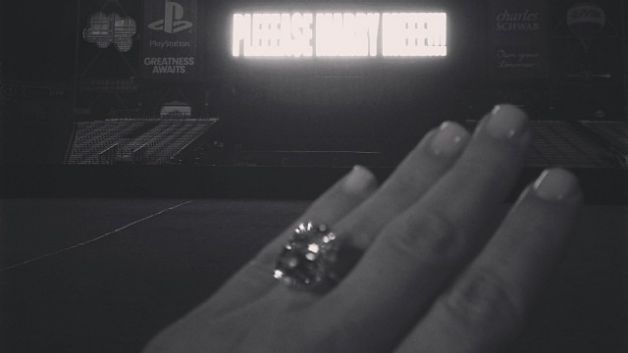 Kanye West and Kim Kardashian’s proposal video was leaked to the Internet and the couple plans to sue, TMZ reports. Unofficial footage landed on the ‘net not long after West popped the question at San Francisco’s AT&T Park.

Sources say the couple has an idea of who secretly recorded and leaked the video. The person involved signed a confidentiality agreement and broke the contract by uploading the footage.

‘Ye, 36, proposed to his girlfriend on her 33rd birthday Monday (Oct. 21) with her family and their infant daughter, North West, on hand. The Chicago rapper dropped a reported $30,000 to rent out the park and $1.6 million on a 15-carat diamond engagement ring. West also arranged for “PLEEEASE MARRY MEEE!!!” to flash across a scoreboard and  commissioned a 50-piece orchestra to play the reality star’s favorite song, Lana Del Ray’s “Young and Beautiful.”

West and Kardashian’s romantic moment was also captured by E! cameras and will reportedly air on Keeping Up with the Kardashians.

The couple plans to tie the knot soon, sources say.

For the original report go to http://www.bet.com/news/music/2013/10/24/report-kanye-west-plans-to-sue-proposal-video-leaker.html