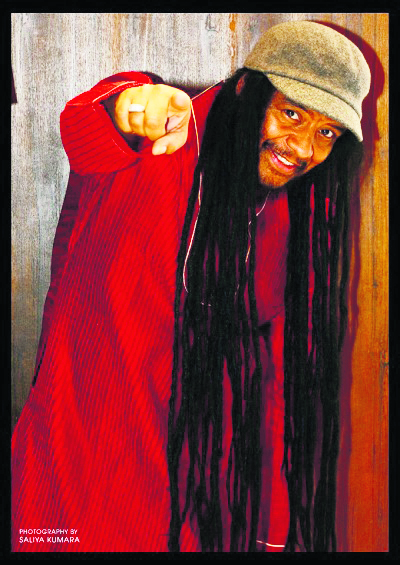 Maxi Priest has been at the forefront of the international reggae game for years. He’s left no facet of the business untouched – from appearances on the silver screen to two ‘Best Reggae’ Grammy nominations!

However, before the glitz, glamour and success, the chart-busting maestro’s beginnings were extremely humble. Who is this man really, and where did he come from?

“Maxi Priest is Max Elliot and he is a young black boy from South-East London (New Cross) who used to sit down on a staircase and think ‘there’s got to be more to life than this”.

I was fascinated by the riveting story of a boy who came to find his long sought-after acceptance, within a society who deemed him ‘strange’, through the art of reggae music. Moreover, he was not alone in this struggle for identity; the ostracization from the greater part of society was common amongst young black people growing up in 1970s, white-dominated London.

There came about a borrowing of the Jamaican ‘sound system’, where music would be played at gatherings with live performances by various budding reggae artists. The rhythmic vibrations would literally make waves from the giant speakers into the very souls of those who listened. It brought a mutual message of ‘home’ and for many, an avenue through which these young people could create a destiny.

There are many examples of UK sound systems; but it was through Lewisham’s iconic ‘Saxon Sound System’ that Maxi Priest’s career began and it was also the starting point for artists such as Tippa Irie, Pato Banton & Smiley Culture – all of whom have had measurable international success.

“Saxon holds a special place in my heart…Sound Systems, as a whole, played a key part in the connection between us and Jamaican artists who would come over. In a sense, their presence, them coming around the Sound Systems made it ‘legit’; we’d gain a seal of approval from Jamaica”

With the plethora of superb talent within the UK Reggae Industry, why have no other artists quite reached the level of Trans-Atlantic success that Maxi has?

For the most part, he puts it down to the reluctance amongst many of his fellow artists to travel. When he left the UK, for Jamaica, in 1987 this proved to be a key ingredient in the recipe for ‘cross-over’ success; he met with some production heavy-weights such as Willie Lindo, Sly & Robbie and hence, the subsequent release of his third, self-titled studio album in 1988.

This album spawned one of his biggest hits ‘Close To You’ which firmly put him in the history books as one of two reggae acts (besides UB40) to have a #1 American Billboard Hit. The world has since embraced Maxi Priest.

On the topic of ‘embrace’, there has been an on-going concern from some notable members of the UK Reggae Fraternity that our own Reggae Disc-Jockeys/Radio Presenters do not do enough to support home-grown talent. Staring pensively into his cup of herbal tea, Maxi quickly responds: “It’s a fact.”

He goes on to diagnose part of the current state of play with a case of an impersonal ‘grass is greener’ mentality; arguing that because UK artists are accessible, they’re not supported over Jamaican artists.

This leads back to his earlier notion regarding the importance of travel, in order to get oneself ‘out there’ and he adds: “I’ve met some truly inspirational people, from all sorts of place and countries…I am truly blessed”

Maxi Priest continues to tour the world to sold-out audiences and has plans to release a brand new album later in 2013.