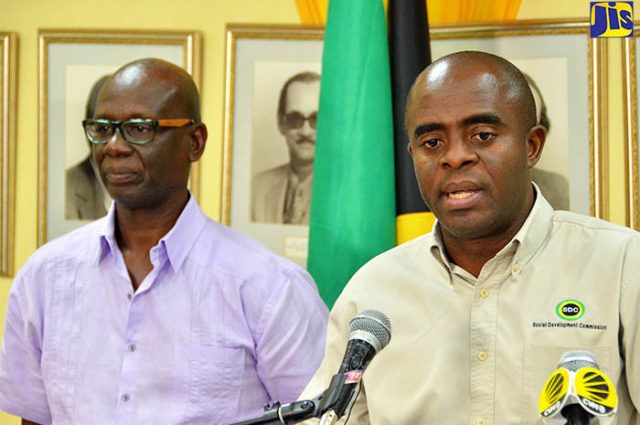 Speaking at a post-Sectoral Debate press conference at the Ministry of Local Government and Community Development, on Hagley Park Road, yesterday (April 20), Dr. Vernon said the SDC has been having tremendous success in terms of creating additional employment, and “extending the opportunities that would go to youth who have business ideas”.

The programme, funded by the Government of Jamaica, is geared at stimulating sustainable economic development through the growth of community microenterprises.

He added that the SDC is putting in place a Local Economic Development Support grant, which will be used to provide support in three main areas.

“One, helping businesses to become registered; two, allowing them to market their products; and three, for those who need to purchase small equipment. So, it is not a large grant, but it is a grant that we are able to afford now, thanks to the additional support of the Ministry,” Dr. Vernon explained.

The LEDSP builds on a range of existing micro, small and medium enterprise (MSME) support programmes being undertaken by the Government to spur economic growth at the community level.

The programme provides support in the areas of capacity building, networking and building partnerships, direct support and the implementation of an incentive scheme. The SDC has also developed a database that serves as a hub for networking among the partners under the programme.

Over the just-concluded financial year, the SDC increased the number of Jamaicans who entered into entrepreneurship, with some 320 local businesses created, generating a value of $657.4 million.

This is in addition to the approximately 3,000 jobs that the SDC routinely creates for people around the country through business fairs, expos, community mapping and other activities.