Travelers can expect to be greeted in true Canadian fashion, with the brand’s lumberjack plaid, Canadiana culture and unforgettable twist on Canada’s traditional poutine. Smoke’s Poutinerie offers a large variety of poutine loaded with an unlimited selection of mouthwatering ingredients.

The partnership between Smoke’s Poutinerie and global restaurateur HMSHost, which operates this location, is literally bringing the great outdoors to travelers right inside the airport with Smoke’s first mobile food truck style eatery. HMSHost is a world leader in creating dining for travel venues, operating in more than 120 airports worldwide. This airport site is taking the Smoke’s Poutinerie brand another giant leap towards their GLOBAL DOMINATION! vision.

The City of Toronto is widely known for its distinct food truck scene and this launch will reinforce that notion to all foreign and domestic travelers who can try good Canadian food outside of the bored traditional restaurant setting. Canada’s iconic mess of golden French fries, squeaky cheese curds, and piping hot gravy will now be the first delicious taste of Canada that new comers experience.

“It’s our goal to be in every airport, in every city and every country in the WORLD!” said Ryan Smolkin, CEO (Chief Entertainment Officer) of Smoke’s Poutinerie. “Toronto Pearson Airport is the perfect location to launch our Poutinerie partnership with HMSHost and our very first Smoke’s Poutinerie restaurant in the travel industry. It’s only a matter of time until Plaid Nation Fans can get their Poutine fix in airports globally.”

“HMSHost is thrilled to partner with Smoke’s Poutinerie and the Greater Toronto Airports Authority to bring one of Canada’s most iconic dishes to travelers,” said HMSHost Vice President of Business Development Amy Dunne. “With its signature poutine and the unique food truck style atmosphere, Smoke’s Poutinerie makes for a perfect local dining experience at Toronto Pearson International Airport.”

The launch of the new location is in cooperation with the Greater Toronto Airports Authority (GTAA), the operating body of Toronto Pearson International Airport, that welcomes over 44 million passengers through its terminals per year. Smoke’s Poutinerie sources authentic, top-of-the-line ingredients, including potatoes that are grown, picked and shipped from the brand’s own farms in Prince Edward Island and quality cheese curds from producers in Quebec. The menu features fan favorites, such as Chicken Bacon Ranch, Butter Chicken, Chipotle Pulled Pork, Nacho Grande, Veggie Deluxe and many more!

About Smoke’s Poutinerie
Founded in 2009 by creative genius Ryan Smolkin, Smoke’s Poutinerie is the World’s Largest and Original Poutinerie. Representing 80’s Canadiana culture, known for the signature lumberjack plaid, and glam rock music, Smoke’s Poutinerie serves over 30 varieties of its famous poutine. With 150-plus locations in Canada, and 50 more open and in development in the United States, the brand is on course for “GLOBAL DOMINATION!” 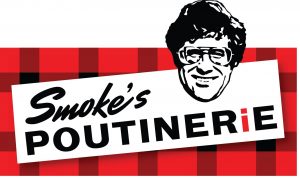