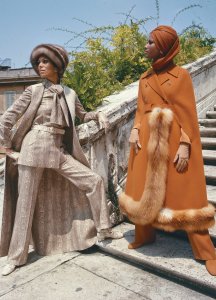 ATLANTA, Nov. 20, 2019 /PRNewswire/ — The Spelman College Museum of Fine Art is proud to present the United States premiere of “Theaster Gates: Black Image Corporation” Jan. 28 – May 16, 2020. This exhibition, which was curated by internationally recognized artist Theaster Gates, includes 10 large format prints by two important African American photographers who both work for the Johnson Publishing Company: Moneta Sleet Jr. (1926 – 1996), the heralded photographer whose photograph of Coretta Scott King at her husband’s funeral won a Pulitzer Prize in 1969, and Isaac Sutton (1923 – 1995), a studio photographer and artist whose fashion photography and iconic photographs of Muhammad Ali, Michael Jackson, Aretha Franklin and many others earned him international acclaim. It also features thousands of images of African American women by other Johnson Publishing Company staff photographers.

“Theaster Gates: Black Image Corporation” was first presented at the Fondazione Prada in Milan in 2018 and subsequently at Gropius Bau in Berlin in 2019.

“Archives are the site of memory and the Johnson Publishing Company archive is an encyclopedic memorial of African American life, in particular the style, grace and beauty of Black women over three decades,” said Mary Schmidt Campbell, Ph.D., president of Spelman and a trustee of The J. Paul Getty Trust, one of several institutions that recently purchased the archive. “Theaster Gates’ exhibition is an exquisitely curated selection of images, shot by two outstanding Black photographers, Moneta Sleet Jr. and Isaac Sutton. As artists, the two photographers turned the pages of Ebony and Jet into galleries filled with defining images of Black women and, with the eye of an artist, Theaster Gates calls attention to the way in which these photographic images capture the imagination and power of self-authorship of Black women that continues to be a potent force in shaping and defining American culture.”

John H. Johnson (1918 – 2005), owner and founder of Johnson Publishing Company, was a highly successful entrepreneur. Established in 1942, the publishing house created publications that were considered essential for Black communities — of them, the most popular were the monthly Ebony and the weekly Jet, which began circulating respectively in 1945 and 1951. Both magazines are widely recognized for celebrating Black success and presenting a counter-narrative to the negative images and stories that were routinely presented in the mainstream press. Ebony and Jet were mainstays and rapidly rose to become the primary platforms for representation and discussion of Black life and culture in the nation. For more than seven decades, they featured a broad spectrum of events and personalities and were unique chroniclers of African American life. Over time, the Johnson Publishing archives grew to include more than four million images.

“‘Black Image Corporation’ takes its name from the impulse of the entrepreneurial premise of John H. Johnson and the Johnson Publishing Company,” shared Gates, explaining his curatorial premise. “This exhibition wanted to show how a set of extremely potent Black images focused on Black women might be reactivated in the public sphere for the purpose of articulating a truth about the American image, fashion, and race, but also how these images function as contributions to the ‘Black Imagination’ and continue to be relevant.”

Through “Black Image Corporation,” Gates reimagined and redeployed the iconic images and curated an interactive exhibition. One of the exciting additions to Spelman’s presentation is the inclusion of Gates’ “Facsimile Cabinet of Women Origin Stories” (2018), which includes photographs by several Johnson Publishing Company staff photographers. It was shown for the first time in the U.S. at the Colby Museum of Art at Colby College with an extensive program by the Lunder Institute for American Art. Visitors will be encouraged to put on archival gloves, handle the rich and varied representations depicting Black women in their everyday lives, historical moments, and studio settings, and select the images that they would like to see on display.

“Theaster Gates: Black Image Corporation” promises to stimulate discussion and curiosity about the importance of the Johnson Publishing Company archives and encourage audiences to align their personal histories with the living legacies of this iconic company,” explained Andrea Barnwell Brownlee, Ph.D., C’93, director of the Museum. “This exhibition aligns with Spelman College’s legacy of being a longstanding and consistent site for art and culture that is deeply invested in the salient power and potential of images of Black women.”

The Spelman College Museum of Fine Art’s presentation of “Theaster Gates: Black Image Corporation” is made possible by the Wish Foundation and the LUBO Fund.

Theaster Gates (b. 1973) is an artist based in Chicago. Internationally renowned for his interdisciplinary practice, his work has been exhibited and performed in institutions including Tate Liverpool (Liverpool), Haus der Kunst (Munich), Palais de Tokyo (Paris), Kunstmuseum Basel (Basel, Switzerland), dOCUMENTA 13 (Kassel, Germany) and the National Gallery of Art (Washington, D.C.). Public collections include Tate Modern, London, Whitney Museum of American Art, New York, Museum of Modern Art, New York, and the Museum of Contemporary Art, Chicago. He is the recipient of several awards including the Légion d’Honneur (2017), the Nasher Prize for Sculpture (2018) and the Urban Land Institute, J.C. Nichols Prize for Visionaries in Urban Development (2018). Gates is the founder and executive director of Rebuild Foundation as well as distinguished artist and director of artistic initiatives at the Lunder Institute for American art at Colby College.

About the Spelman College Museum of Fine Art

The Spelman College Museum of Fine Art, which was established in 1996, inspires and enriches the Spelman College community and the general public through art by and about women of the African Diaspora. In “Six Reasons to Love Atlanta,” CNN.com praised the Museum for its “fantastically curated exhibitions.” As the Museum’s 25th anniversary approaches in 2021, the institution is even more focused on its priorities: continuing its legacy of presenting thought-provoking exhibitions such as “Amy Sherald“ (organized by the Contemporary Art Museum St. Louis, 2019), “PRESENCE: Meditations on the Spelman College Collection” (2019), “Zanele Muholi: Somnyama Ngonyama, Hail the Dark Lioness” (organized by Autograph London and curated by Renée Mussai, 2018), “Deborah Roberts: The Evolution of Mimi” (2018), and “Mildred Thompson: The Atlanta Years, 1986 – 2003″ (curated by Andrea Barnwell Brownlee, Ph.D., and Melissa Messina, 2019) that have garnered critical and popular attention; organizing dynamic and empowering programs; and expanding its relevant collection.

The Museum’s milestones include being selected as the first institution from the United States that jointly (along with the Contemporary Arts Museum Houston) represented the nation at the 2012 Havana Biennial in Havana. In 2015, with support from the Andrew W. Mellon Foundation, the Museum, in collaboration with Spelman’s Department of Art & Visual Culture, launched a Curatorial Studies Program, a pilot initiative to prepare and develop the next generation of curators. With enthusiastic support from the Walton Family Foundation, this program has expanded and in 2018, Spelman established the Atlanta University Center Art History + Curatorial Studies Collective, currently supported by the Alice L. Walton Foundation. For more information about the Museum, visit museum.spelman.edu.

Founded in 1881, Spelman College is a leading liberal arts college widely recognized as the global leader in the education of women of African descent. Located in Atlanta, the College’s picturesque campus is home to 2,100 students. Spelman is the country’s leading producer of Black women who complete Ph.D.s in science, technology, engineering and math (STEM). The College’s status is confirmed by U.S. News and World Report, which ranked Spelman No. 57 among all liberal arts colleges, No. 22 for undergraduate teaching and No. 6 for both innovation and social mobility among liberal arts colleges, and No. 1 for the 13th year among historically Black colleges and universities. The Wall Street Journal ranked the College No. 3, nationally, in terms of student satisfaction. Recent initiatives include a designation by the Department of Defense as a Center of Excellence for Minority Women in STEM, a Gender and Sexuality Studies Institute, the first endowed queer studies chair at an HBCU, and a program to increase the number of Black women Ph.D.s in economics. New majors have been added, including documentary filmmaking and photography, and partnerships have been established with MIT’s Media Lab, the Broad Institute and the Army Research Lab for artificial intelligence and machine learning. Outstanding alumnae include Children’s Defense Fund founder Marian Wright Edelman, Starbucks Group President and COO Rosalind Brewer, political leader Stacey Abrams, former Acting Surgeon General and Spelman’s first alumna president Audrey Forbes Manley, actress and producer Latanya Richardson Jackson, global bioinformatics geneticist Janina Jeff and authors Pearl Cleage and Tayari Jones. For more information, visit www.spelman.edu.