Spice getting ready to drop album 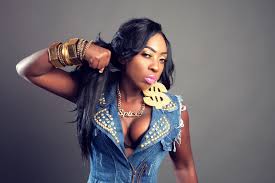 TOP-TIER dancehall deejay Spice said she intends to release her debut album later this year as the timing is “perfect”.

“I am at the highest peak in my career. My record company and I were in no hurry to put out a major project because we no want it flop. We see this year as fitting, so we are working on it,” she told the Jamaica Observer.

Spice, who, along with Chronixx, leads the Youth View Awards (YVA) with eight nominations, said her yet-to-named set will be distributed by VP Records.

In December, Spice (given name Grace Hamilton) released her five-track EP, So Me Like It. She said she is encouraged by how it was well received.

In addition to the title track, the listing includes Wine Ina Di Dance, Go Go, Like a Man, All the Way (ft Elephant Man) and Conjugal Visit (ft Vybz Kartel).

She said she was elated at the YVA nominations.

“Being nominated for eight awards means a lot. It doesn’t matter if I win or not, as just being recognised gives a fantastic feeling,” she said.

Spice said of all the nominations, she is, however, most elated about the category Favourite Dancehall Artiste.

“I am the only female in that category which means that I am standing up inside the industry that is male dominated. I have put in a lot of hard work and now I am reaping what I sew,” she said.

The YVA is scheduled for the National Indoor Sports Arena in St Andrew, tonight.

Spice’s hits include Jim Screechie, Fight Ova Man and Slim Versus Fluffy (a collaboration with Pamputae). However, her biggest single to date is