Cancer Society to Focus on Screenings 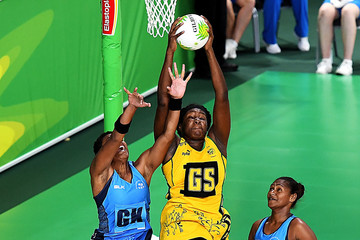 Goal Rush In The Goal Coast

The Sunshine Girls as they are known worldwide showed their dominance in Netball when they got into full stride against Fiji at the Olympic Games. 69 22 at end of the third quarter in favour of the speedy Jamaicans. The match has four quarters.

Fiji opened the scoring in the fourth quarter from their 16 year year old goal shooter Laisani Waqa 7 from 11goal attack/goal shooter and goal shooter/goal attack Maliana Rusivakula was consistent …. in the fourth quarter even as the Jamaicans moved on like an Energizer Bunny. Shamera Sterling was fantastic. Goal shooter Romelda Aitkin who plays professionally for ZNS a New Zealand league, appeared a bit rusty as substitute goal who came on in the second half. In the end it was a convincing 58 goal victory. 88 30 the final score … a  good win for Jamaica. Goal shooter Vangelee Williams, wing defense was one of the star players for Jamaica. Jhanele Fowler-Reid was absolutely superb. Her shooting was almost perfect 40 from 43.

We missed getting up to 90 in my view, due to nerves and missed shots. A great overall performance at the Goal Coast, Australia.