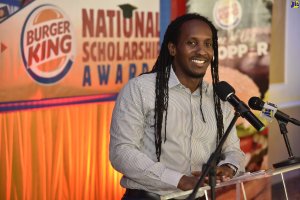 Twenty eight students from across the island, who have excelled academically, have been awarded scholarships, bursaries and grants totalling $5.1 million by restaurant franchise, Burger King Jamaica, to offset tuition and other related expenses.

The scholars, who will be pursuing secondary and tertiary studies, beginning in September, were presented with their awards and prizes, during a ceremony held at the Terra Nova Hotel, in Kingston, on Monday, August 19.

Minister of State in the Ministry of Education, Youth and Information, Hon. Alando Terrelonge, in his remarks, noted that an education is the best gift that can be given to a child. 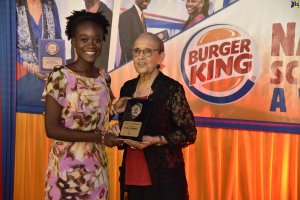 Chairman of Burger King, Lois Sherwood (right), presents the Lois Sherwood Scholarship to Amica Gordon, who will be pursuing Actuarial Science at the University of the West Indies. She was presented with her award during a ceremony held at the Terra Nova Hotel, in Kingston, on Monday, August 19.

Mr. Terrelonge also expressed appreciation to Restaurants Associates Limited, of which Burger King is a franchise, for having invested some $5.1 million into the education of the youth.

The State Minister encouraged the recipients to not let the disparaging remarks of others make them feel less than, “or make you feel like you don’t belong.”

For her part, Head of Sales and Marketing, Burger King, Sabrena McDonald Radcliff, said her organisation believes in unleashing the potential of people.

“This is the reason why since 2001, we have invested more than $43 million in scholarships, bursaries and grants, that have benefitted more than 250 of Jamaica’s youth who have great potential but also had great financial challenges,” Mrs. McDonald Radcliff noted. 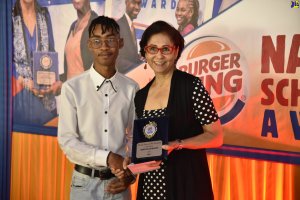 Among the scholarship recipient is Amica Gordon who was presented with the Lois Sherwood Scholarship, valued at $900, 000, payable over three years. She will be pursuing Actuarial Science at the University of the West Indies.

The Rodwell Lake Scholarship, valued at $900,000, payable over three years, was awarded to Quwayne Howell, who will be attending the University of the West Indies (UWI), to pursue a degree in Medicine.

The Burger King Open Tertiary Scholarship, valued at $900,000 [each] and payable over three years, was presented to Lorenzo Blake and Johari Douglas. Both will be studying medicine at the UWI.

Other scholarships awardees included: Akeem Jackson, who received the Lois Sherwood Arts Scholarship, valued at $200,000, to pursue studies at the Edna Manley College of the Visual and Performing Arts.